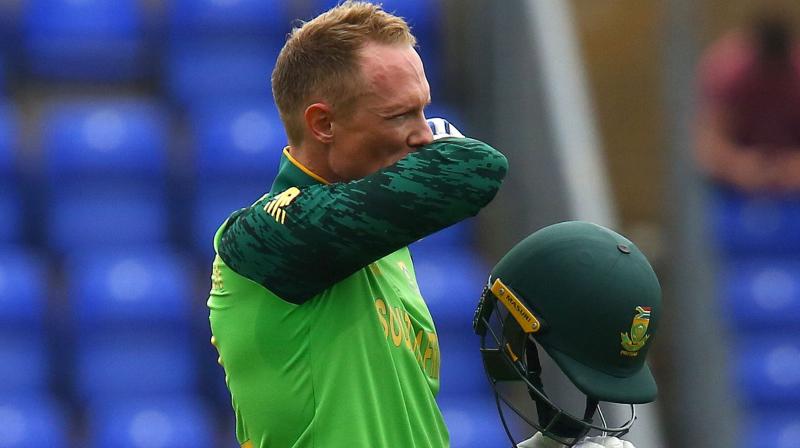 Sticking to his approach of taking one game at a time, Dussen is looking forward to performing well himself too on the 'biggest stage in the world'. (Photo: AFP)

Dubai: South Africa batsman Rassie van der Dussen exuded confidence in his squad saying they have got 'world class' players and, consequently, have a really strong chance of winning the ICC Men's Cricket World Cup set to begin on May 30.

"In terms of our chances as a team, we have match-winners right up and down the line-up. We're not favourites in this tournament, which is probably the first time in a while that we don't enter as out-and-out favourites, but we are going to look to use that to our advantage and I think we have a really strong chance," ICC quoted Dussen as saying.

Sticking to his approach of taking one game at a time, Dussen is looking forward to performing well himself too on the 'biggest stage in the world'.

"I've been playing a while now, and if a year or two ago you had said to me I'd be here, then I would have expected a lot to happen in that time. You see it as a possibility, it's always been a dream and goal to represent my country, let alone in a World Cup. I'm really honoured to be here and looking forward to it to start. This is the biggest stage in the world and that's where you want to perform," he said.

"I've played a few games for South Africa now, and the last two years have been good for me form-wise. My basic concept was to take it a game at a time and be at your best every moment and every ball. I'm going to try and keep that going, and whether the stage is big or not, the fundamentals of the game stay the same," Dussen added.

South Africa won their first warm-up game against Sri Lanka by 87 runs and will now face West Indies for their second warm-up game on May 26 before heading to the World Cup where they will face England in the opening match of the premier tournament on May 30.