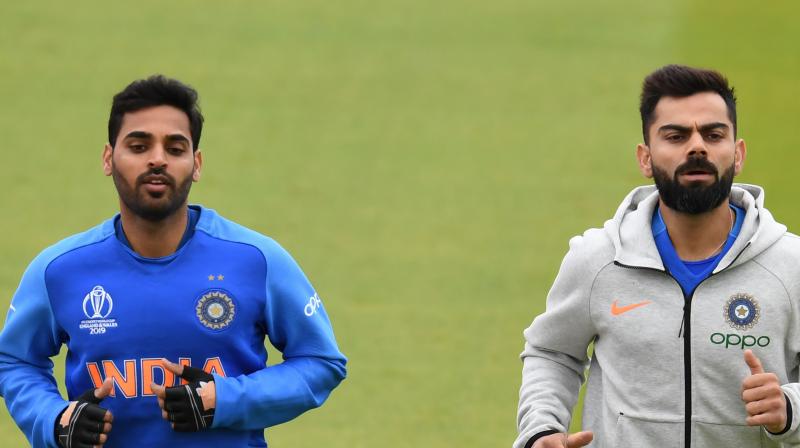 India sit at the third position in the World Cup standings with nine points from five matches. (Photo: AFP)

Manchester: Pacer Bhuvneshwar Kumar on Tuesday was seen in nets practicing with the Indian team ahead of the World Cup match against West Indies, scheduled for June 27.

Kumar returned for practice days after nursing his left hamstring injury which he sustained during the clash against Pakistan on June 16. Subsequently, he was rested for the match against Afghanistan and Mohammad Shami made his way in the playing XI.

The 29-year-old looked in good shape and bowled in the nets for at least half an hour. Chief Selector MSK Prasad and fitness coach Farhart Patrick were seen monitoring the paceman.

Bhuvneshwar's injury is healing, but whether he will play or not against West Indies is not clear. There is no hurry in terms of picking Bhuvneshwar in the squad. The team management may give him some more rest and may again go with Shami, a BCCI source told ANI.

India's batting coach Sanjay Bangar's 16-year-old son Aryan was seen bowling in the nets. He was not bowling to any batsman but was under the watchful eyes of India's bowling coach Bharath Arun.

Arun was seen giving tips to Aryan, who plays junior county in England and has taken five wickets in one of the matches.

India sit at the third position in the World Cup standings with nine points from five matches.