Seventh-placed Bangladesh can increase the lead over Sri Lanka when the teams face off in a three-match series. 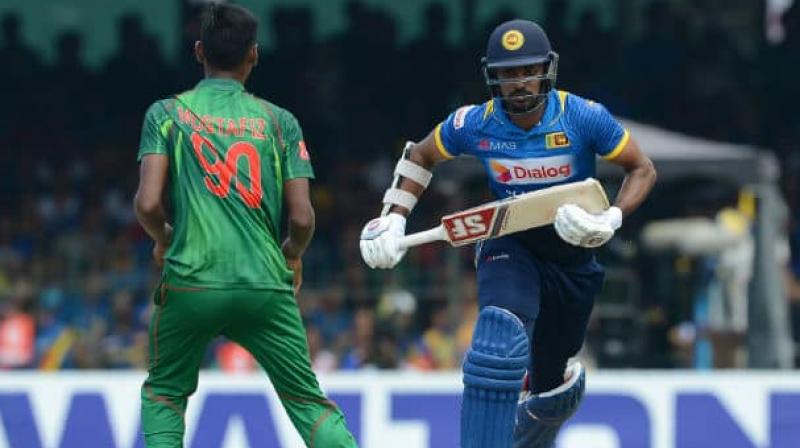 Retiring fast bowler Lasith Malinga is in the focus as Sri Lanka and Bangladesh players prepare for their first series after the World Cup. (Photo:AFP)

Dubai: After a downgrade performance in recently concluded World Cup, both Sri Lanka and Bangladesh will look to improve their ODI ranking in the upcoming bilateral series.

Seventh-placed Bangladesh can increase the lead over Sri Lanka when the teams face off in a three-match series.

Retiring fast bowler Lasith Malinga is in the focus as Sri Lanka and Bangladesh players prepare for their first series after the World Cup.

Malinga, who will retire from ODIs after the opening match, is the second-highest ranked bowler from his side in 35th position, with 552 rating points. He is nowhere near his peak in terms of rankings, but the 35-year-old would like to go out with a memorable performance to cap a 15-year ODI career.

The only bowler to have taken three ODI hat-tricks, Malinga attained a career-high points tally of 675 after a memorable spell of three for 22 against Bangladesh in Colombo on July 2007. His highest ranking was seventh in November 2011, achieved against Pakistan in Dubai.

Spinner Akila Dananjaya is the highest-ranked bowler from Sri Lanka in 21st position, while Angelo Mathews and Niroshan Dickwella are the leading batsmen for the home side, in 35th and 42nd positions, respectively.

In the absence of World Cup star and world's top-ranked all-rounder Shakib Al Hasan, who has been rested from the series, Bangladesh batsmen Mushfiqur Rahim (19th) and Tamim Iqbal (27th) will be leading the charge among batsmen, while Mustafizur Rahman (15th) and Mehidy Hasan Miraz (17th) would be looking to move towards the top 10 in the bowlers' list.

Currently, Sri Lanka are at the eighth spot with 79 points whereas Bangladesh are at seventh place with eleven points more than the Lankan team.

Bangladesh can increase the lead over Sri Lanka from 11 to 16 points with a 3-0 win while losing the series by the same margin could see them slip to ninth position, behind the West Indies on decimal points.

While if Sri Lanka clean-swept Bangladesh in the series they will gain three points and finish with 82 points at the same spot.

Sri Lanka will face Bangladesh in the first ODI at Colombo on July 26.