Sports   Cricket  25 Jul 2019  Virat Kohli the only cricketer to be in the top-10 Instagram’s sporting 'rich-list'
Sports, Cricket

The list is dominated by international footballers like Cristiano Ronaldo who ranks first, followed by Neymar, Lionel Messi at 2nd and 3rd.. 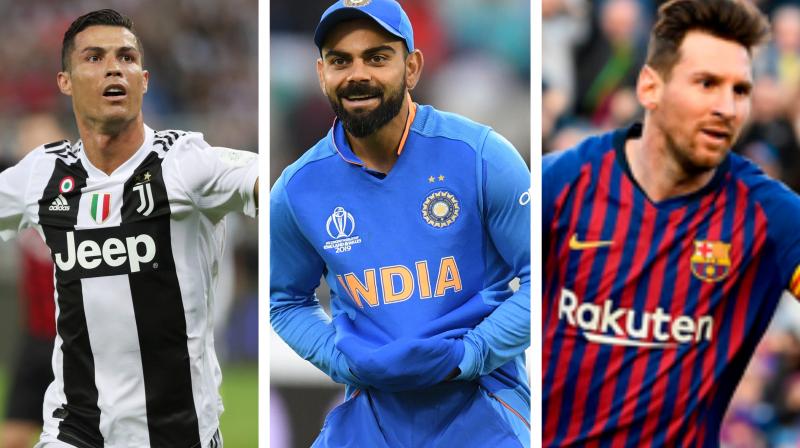 As per HopperHQ.com, an Instagram scheduling button, Virat Kohli earns a whopping sum of 196,000 from each Instagram post, and the value in Indian Rupees will be around Rs 1,35,66,749. (Photo:AP/AFP/PTI)

Mumbai: As per HopperHQ.com, the only cricketer who has made it to the top-10 Instagram’s sporting “rich-list” for 2019 is none other than India men’s cricket team captain Virat Kohli. However, the cricketer currently sits in the ninth position in the list, but the list is dominated by international footballers like Cristiano Ronaldo who ranks first, followed by Neymar and Lionel Messi at second and third respectively.

After becoming the richest Instagram cricketer, Kohli has also shown why he is the most popular among all other cricketers.  Currently, Kohli ranks first in Tests and ODIs. Nevertheless, the Indian captain is lagging behind the five-time Ballon d’Or winners Cristiano Ronaldo and Lionel Messi who have 296 million followers. CR7 alone has 173 million followers, while Messi has 123.

Apart from Kohli, the only other Indian in the top 100 “rich-list” is International actor Priyanka Chopra 43.4 million followers.

Meanwhile, the other women who feature in the list are Ronda Rousey and Serena Williams. Former Universal Fighting Champion (UFC) Ronda Rousey earns USD 67,700 from each post, and she’s a little bit ahead of tennis sensation Serena William who charges 60,500.