Rahul remained in the thick of things after the hosts elected to field, contributing in dismissal of four Tamil Nadu batsmen. 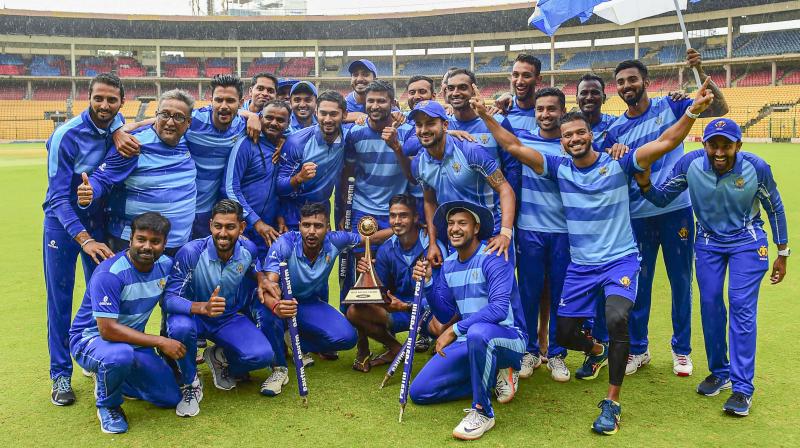 Karnataka lifted the Vijay Hazare Trophy title with a 60-run win over Tamil Nadu in the rain-hit final on Friday. (Photo: PTI)

Bengaluru:  KL Rahul presented himself as a potent keeper-batsman option with a strong show while birthday-boy Abhimanyu Mithun savoured a rare hat-trick as Karnataka lifted the Vijay Hazare Trophy title with a 60-run win over Tamil Nadu in the rain-hit final, here on Friday.

Rahul remained in the thick of things after hosts elected to field under overcast conditions, contributing in dismissal of four Tamil Nadu batsmen.

Mithun returned with his first-ever five-wicket haul in List A games, which included a hat-trick in the final of the innings. He cleaned up M Shahrukh Khan, M Mohammed and Murugan Ashwin as Tamil Nadu folded for 252 in 49.5 overs.

The MSK Prasad-led selection panel on Thursday picked Rahul in India's Twenty20 squad for the Bangladesh series along with Rishabh Pant and Sanju Samson.

Prasad said they are willing to give Pant a long rope despite his below-par show of late but Rahul by keeping the wickets in the semi-final and final has made a case for himself, looking at the future.

His batting talent has never been doubted and in the final, which had to be called off due to rain, Rahul scored an unbeaten 52 off 72 balls in Karnataka's total of 146 for one in 23 overs.

He lost his opening partner Devdutt Paddikal (11) but added 112 runs with Mayank Agarwal for the second wicket, keeping Karnataka ahead all the time in the contest.

It will be interesting to see if KL Rahul can go the Rahul Dravid way as the latter emerged a wicket-keeper batsman after the 1999 World Cup, where had to keep wickets because of an injury to Nayan Mongia but from 2002 became a regular keeper-batsman, giving much needed balance to India's ODI side under Sourav Ganguly.

Eventually, Karnataka were declared winner in the final on VJD method (used in domestic cricket in rain-affected games), giving the hosts their fourth title on domestic ODI tournament. They had won in 2013-14, 2014-15 and 2017-18.

Tamil Nadu, who have become champions five times in the past, struggled to put a fighting total with only Abhuinav Mukund (86) and young Baba Aparajith (66) managing fighting half-centuries.

Vijay Shankar (38) and Shahrukh (27) got starts but could not convert them into bog knocks as Mithun ran through the middle and lower-order.

"We are very happy with the results. The mindset of the boys is they want to win every match they play. Hopefully, we will continue doing well," he said.

Tamil Nadu skipper Dinesh Karthik too expressed happiness for the way they played throughout the tournament.

"I think we played terrific cricket, one bad day doesn't make a bad team. This should give confidence going into the T20s and the Ranji Trophy," he said.