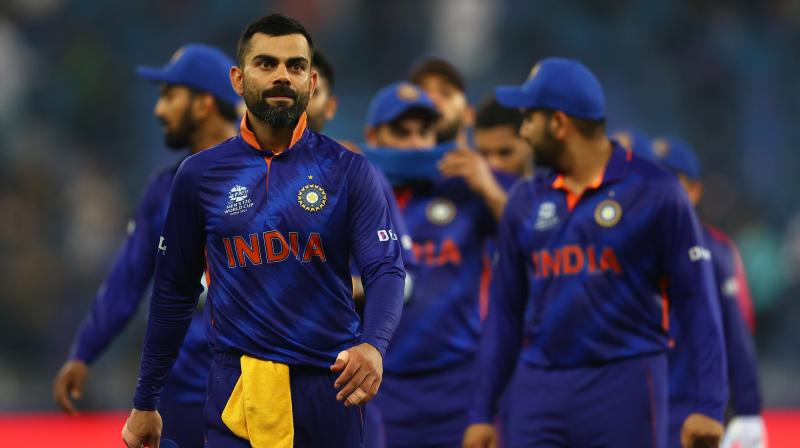 Hyderabad: The much-anticipated match of the T20 World Cup 2021, India vs Pakistan, was played on Sunday, but fans of the Indian team were in for a disappointment as Team India lost to Pakistan by 10 wickets.

The Indian team was also seen to be disappointed, with captain Virat Kohli accepting that the Pakistan team outplayed them.

But what left Kohli amused was a journalist's question about Rohit Sharma. At the virtual post-match press conference, a journalist asked Kohli if he would drop Rohit and bring Ishan Kishan into the team.

The Team India captain replied to the journalist with utter amusement and asked what his suggestion was.

"It's a very brave question. What do you think, sir? I played the team that I thought was the best. What is your opinion? Will you drop Rohit Sharma from T20 internationals? You'll drop Rohit Sharma? Do you know what he did in the last game that we played? Yeah? Unbelievable."

"If you want controversy, please tell me before so I can answer accordingly," he added while hiding his anger with a grin.

For the unversed, Rohit Sharma was dismissed for a duck by Shaheen Shah Afridi in the match played on Sunday.

On the opposition team's winning, Kohli said, "They definitely outplayed us. There is no doubt about that. You don't win by 10 wickets if you don't outplay the opposition. We did not even get any chances. They were very professional."

"Look, you definitely have to give them credit. We tried our best. We tried to create enough pressure on them, but they had the answers, and there is no shame in accepting that a team played better than you," he added.

Pakistan restricted Team India to 151/7 and this score was chased down by the Babar Azam-led side with all the ten wickets in hand.