After 14 wickets tumbled on the first day, the second was no better with as many as 19 dismissals falling by the wayside. 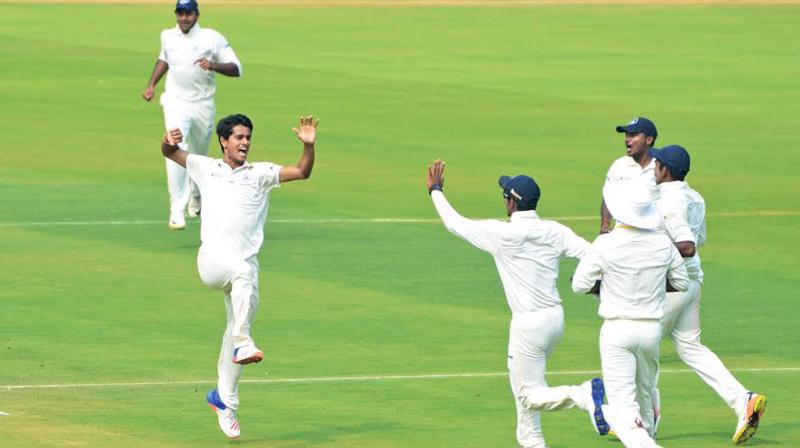 Vizag: Karnataka had two Gen-Next superstars of Indian cricket but a Tamil Nadu pace attack, with a cumulative experience of 35 matches, did the star turn to script a stunning seven-wicket victory inside two days in the Ranji Trophy quarter-final on Saturday.

After 14 wickets tumbled on the first day, the second was no better with as many as 19 dismissals falling by the wayside.

Starting the day at 111/4, Tamil Nadu were bowled out for 152, taking a lead of 64 runs. Karnataka were no better in their second essay as they were again all out for 150 with seamers Aswin Crist (1/50), Thangarasu Natarajan (3/40) and Krishnamoorthy Vignesh (4/53) sharing the spoils.

While Rahul showed his class with a polished 77 with 13 boundaries, M Kaunian Abbas’ 15 being the second highest score showed the plight of Karnataka batting.

A target of 87 was achieved in 19.3 overs with Dinesh Karthik, playing his 100th Ranji Trophy game, smashing 41 off 30 balls with five fours and two sixes.

Knowing well that survival on this seaming track is a difficult proposition with Tamil Nadu in trouble at 35/3, Karthik let Baba Indrajith hold one end up as he decided to take on the attack to the opposition camp and added the required 52 runs in 10 overs. He was severe on leggie Shreyash Gopal, clobbering him for 24 in 2.3 overs.

Add his contribution of 31 in the first innings, and Karthik is by far Tamil Nadu’s most significant contributor in this victory.

It was a match in which the Tamil Nadu side, which has now learnt to live without Ravichandran Ashwin and Murali Vijay, outbowled a team comprising K.L. Rahul and Karun Nair, who have been run-machines in domestic cricket.

On a green-top that once again exposed poor technique and application of domestic batsmen, 33 wickets fell with only 148.2 overs of play yielding a result.

One can attribute the abject surrender to green-top or poor application, but it was once again evident that India’s regular domestic batsmen find it difficult to play on bowling friendly tracks.

That Rahul was a cut above rest was evident in the manner he handled Tamil Nadu’s first innings hero Crist along with Vignesh and Natarajan.

When Rahul finally edged one to Karthik off Natarajan’s bowling, he was the eighth Karnataka batsman to get out for a score of 130.

For Karnataka, the biggest disappointment was India internationals Manish Pandey, Stuart Binny and C.M. Gautham, who failed to score a single run. Karun came to bat as down as no. 8, hit a couple of boundaries in his 12 before edging Vignesh to Karthik.