At stumps, Shubham Ranjane (12) and Aditya Tare (7) were at the crease for Mumbai. 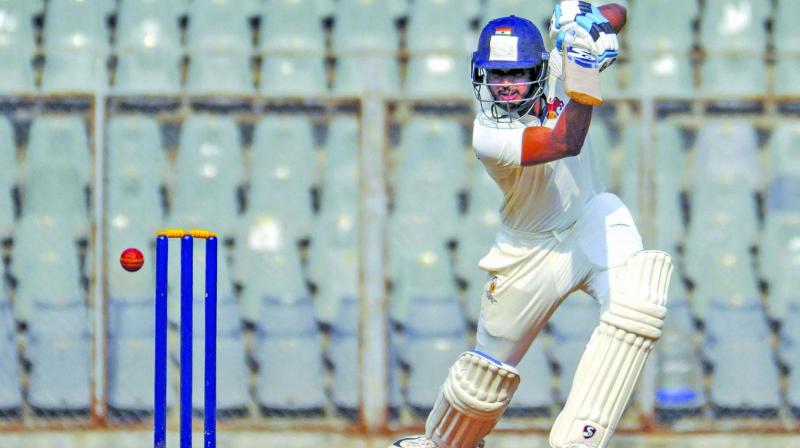 Mumbai’s Shreyas Iyer plays a shot against Saurashtra in their Ranji Trophy match at the Wankhede Stadium, in Mumbai on Monday. (Photo: PTI)

Mumbai: Shreyas Iyer blitzed his way to 83 of just 60 balls after Mumbai pressed on for a much-needed outright victory after taking the first innings lead over table toppers Saurashtra in their Ranji Trophy tie Monday.

Iyer slammed seven sixes, three of them off successive balls from left-arm spinner Dharmendra Jadeja before perishing to the fourth ball while trying for a fourth maximum hit.

Mumbai ended Day Three of the four-day Elite Group A match by making 175/5 in their second innings, an overall lead of 221 going into the final day on Tuesday.

Iyer, who looked out for runs from the first ball he faced after coming to the crease at 20/1, also struck 5 fours and got involved in a rapid-fire fourth wicket stand of 74 in 57 balls with all rounder Shivam Dube who made a brisk 29-ball 39 with the help of three sixes and as many fours.

Earlier, resuming at the overnight 213/5 chasing Mumbai’s first innings total of 394, Saurashtra were bowled out for 348, with 12 minutes left for tea.

At stumps, Shubham Ranjane (12) and Aditya Tare (7) were at the crease for Mumbai.

At Nagpur, hosts Vidarbha posted a hefty 485 in their first essay and overhauled Gujarat’s first innings score of 321.

Wasim Jaffer slammed 126 and there were crucial contributions by the middle order batsmen for the hosts. Gujarat ended the penultimate day at 22/1, still trailing by 142 runs.

At Shivamoga, Railways needed 318 runs to win against hosts Karnataka, with nine wickets in hand.

In Dharamsala, Abhinav Mukund made an unbeaten 111 to lead Tamil Nadu’s fightback after conceding a first innings lead of 236 runs to Himachal Pradesh on the third day of the Group B match.

On the way to his ton, Mukund surpassed Sridharan Sharath (6597) as the highest run-scorer for Tamil Nadu in Ranji Trophy. His knock kept the team in the hunt after conceding a massive lead.

Earlier, Himachal resuming at the overnight 240/5, added 223 runs with Ankit Kalsi moving from 99 to 144 not out. Rishi Dhawan could score only four more runs after resuming at 71 but the lower order helped the centurion extend the team’s lead.

Left-arm spinner Vikas Mishra yet again tormented Madhya Pradesh batsmen with a six-wicket haul as Delhi thumped the visitors by nine wickets for their first victory of the ongoing Ranji Trophy season.