BCB rejects proposal to play Test in Pakistan, says wants to play T20I only in Pak

The message was conveyed by BCB chief executive Nizamuddin Chowdhury on Tuesday. 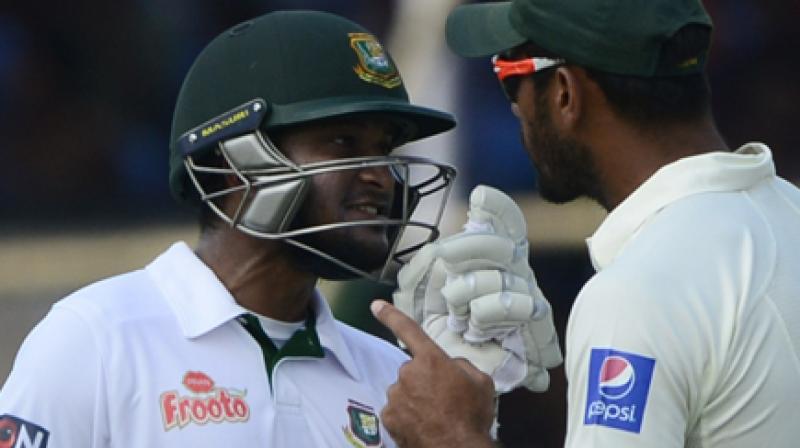 Refusing to budge from its stand, the Bangladesh Cricket Board has said it was ready to play only T20 Internationals in Pakistan, preferring a neutral venue for the planned Test series.(Photo:AFP)

Dhaka: Refusing to budge from its stand, the Bangladesh Cricket Board has said it was ready to play only T20 Internationals in Pakistan, preferring a neutral venue for the planned Test series.

The message was conveyed by BCB chief executive Nizamuddin Chowdhury on Tuesday.

His comments come a day after Pakistan Cricket Board chairman Ehsan Mani asserted that there was "absolutely no doubt" they would play all home series in the country, going forward.

"We stand firm on our ground. We only want to play T20Is in Pakistan. The stakeholders related to the series do not want us to play longer-version cricket in Pakistan," Nizamuddin was quoted as saying by 'The Daily Star'.

"Actually, we have no other option here. We can play the T20Is but if we are to play Tests then it should be in a neutral venue."

In an e-mail to the BCB, the Mani asked the Bangladesh board to give "acceptable reasons" for refusing to send its team to Pakistan for the two Tests of the ICC World Test Championship, scheduled to be held from January 18.

The Bangladesh board's top officials have been quoted this week in the media as saying that they will not be playing Tests in Pakistan due to security concerns.

Mani said they are ready to address Bangladesh's security concerns.

The PCB chief said Pakistan is "safe" after Test cricket returned to Pakistan for the first time since the 2009 terror attack in Lahore.

Citing Sri Lanka's tour of the strife-torn country, Mani said, "We have proved that Pakistan is safe, if someone isn't coming then they should prove that it's unsafe."

Mani also hinted that they could raise the matter with the International Cricket Council should Bangladesh refuse to play the Tests in Pakistan.

Pakistan were due to host Bangladesh in January for three T20 Internationals and two Tests.