India pull a rabbit out of the hat

Kohli would have dearly liked to be in the thick of battle at Dharamshala as a batsman and captain to prove a point or two. 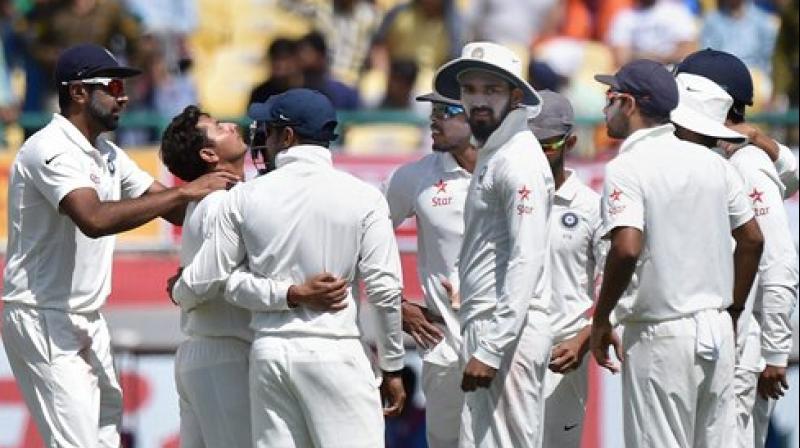 Kuldeep Yadav with team mates after taking the wicket of David Warner during the first day of last test match. (Photo: PTI)

The big suspense on the eve of the fourth Test between India and Australia was over Virat Kohli’s participation. It drew the attention of the entire cricketing world and kept the news wires humming almost on an hourly basis.

The bigger surprise on the morning of the match, however, was not of Kohli withdrawing, but young left-arm-chinaman bowler Kuldeep Yadav being given his Test cap.  This was against all pre-match prognostications.

Kohli’s non-participation was not entirely unexpected. In the days since he hurt himself in Ranchi, his future in this series was always iffy, though many mistook his dithering for mind games against the Aussies.

Such bruises as Kohli suffered can be confounding. They may not limit movement entirely, yet can be severely constraining. Or get worse, which is hardly what you would want to happen to the team’s stellar player.

Kohli would have dearly liked to be in the thick of battle at Dharamshala — as batsman and captain to prove a point or two — in the last match of a series that was on a knife’s edge.

But the risk was not worth it. Sometimes prudence must prevail over heroics. However, surely nobody could have predicted Kuldeep Yadav taking his place. This was like pulling a rabbit out of the hat and left everybody — particularly the Aussies one would imagine — flummoxed.

Apart from Kohli’s fitness, all talk surrounding this series had been about what the pitch at Dharamshala would play. Not unusual considering such speculation had accompanied the previous Tests too, sometimes farcically so.

But with the series so crucially placed, this had become relevant. And consensus, supported by the statements of curator Sunil Chauhan, was that in the hilly climes, pace would be of greater use than slow bowling.

India had even included Mohammed Shami in the squad, and till Kuldeep Yadav was actually given his cap, it seemed certain that either Shami or Bhuvaneshwar Kumar or both (with Ishant sitting out) would be playing.

As it happened, Shami didn’t make the cut. Bhuvi did, but not to make a three-man pace complement. Instead, India plumped for a spin troika, with Kuldeep teaming up with Ashwin and Jadeja.

The gambit paid off splendidly. Mixing his stock deliveries with the wrong uns and chinamen adroitly, Kuldeep had the Australian batsmen hopping, playing and missing, getting dismissed. All through this tour, they had focused time and attention on how to tackle Ashwin and Jadeja. Newbie Yadav had them bambozzled. At 131/1 at lunch, Australia looked good for 450-500: an hour after tea (as I complete this piece), they had been reduced to 274/8.

How the last Test will play out from here is anybody’s guess. But on the first day, despite Steve Smith’s brilliant century (with seven centuries in his last eight Tests, he really does love Indian bowling!) the honours belonged to the home side. What I found admirable about the decision of the team ‘think tank’ was courage of conviction in making up the attack as well as gumption in the composition of the playing side. Both were loaded with risk.

In choosing a third spinner, they obviously read the pitch differently from what popular opinion suggested. There was a huge risk in taking a contrarian position. What if the pitch turned out to be tailor-made for pace?

More critically, in replacing Kohli with a bowler, India were taking the field with only five specialist batsmen. In a taut series where the Indian batting has also come under a lot of pressure, this was gutsy.

The fact that India didn’t settle for a ‘safer’ option in shoring up the batting, hedging for a draw if things didn’t quite pan out the way they would like, reveals an aggressive, play-to-win mindset that is admirable.

This was tactical thinking laced imbued with a high degree of positivity and self-belief. I dare say Test cricket, which can frequently lapse into dull, dreary draws because captains/coaches are unimaginative and defensive, needs this badly.