India pegged back to 248/6 after Lyon heroics 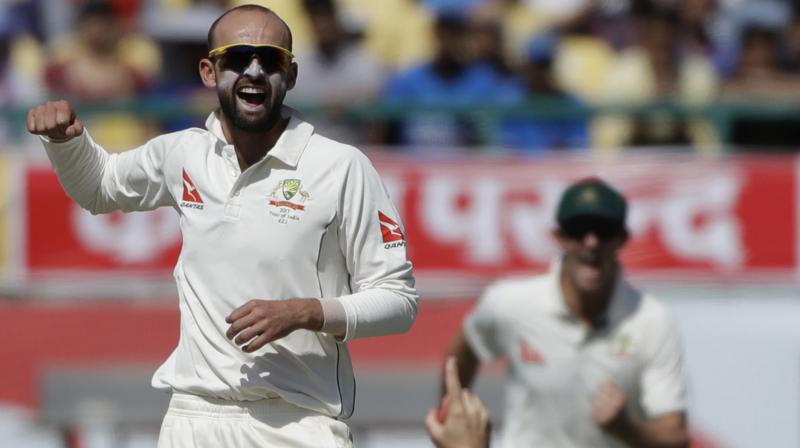 Dharamsala: Nathan Lyon produced a stellar performance, picking up four wickets, to restrict India to 248 for 6 at the end of the second day's play at the HPCA Stadium in Dharamsala, on Sunday.

India came in after having closed the first day with an upper hand. However, some tight bowling by the Aussies meant that wickets kept falling at regular intervals.

India trudged to 64-1 at lunch in the face of some intense bowling by the Australian quicks on the second day of the decisive fourth and final Test on Sunday.

Opener Lokesh Rahul was batting on 31 with Cheteshwar Pujara on 22 after the hosts lost Murali Vijay early in the first session at Dharamsala, India's newest Test venue.

India trail by 236 runs with Australia having made 300 in their first innings, largely thanks to a century by skipper Steve Smith.

The Australia new ball pair of Josh Hazlewood (1-16) and Pat Cummins bowled their hearts out on a lively track that offered ample pace and bounce.

The duo's testing spells peppered generously with short balls kept the Indian batsmen in check in a gripping first session which saw the hosts score at just over two runs an over.

The bowlers' consistent effort was rewarded soon when Hazlewood lured Vijay (11) into edging one behind to wicketkeeper Matthew Wade in the 11th over.

Rahul, dropped on 14 by Matt Renshaw at first slip off Cummins, batted cautiously and facing 75 balls while hitting five boundaries.

Pujara, coming into the match on the back of an epic 202-run knock in the drawn Ranchi Test, struck the second ball he faced for a delectable boundary through the covers.

But from then on he batted sedately, opting mostly for low-risk shots during the 57 balls he has faced.

With the series tied 1-1 going into the finale, top-ranked India must win the match to regain the Border-Gavaskar trophy.

Australia, who triumphed at home in 2014-15, need just a draw to retain the trophy.