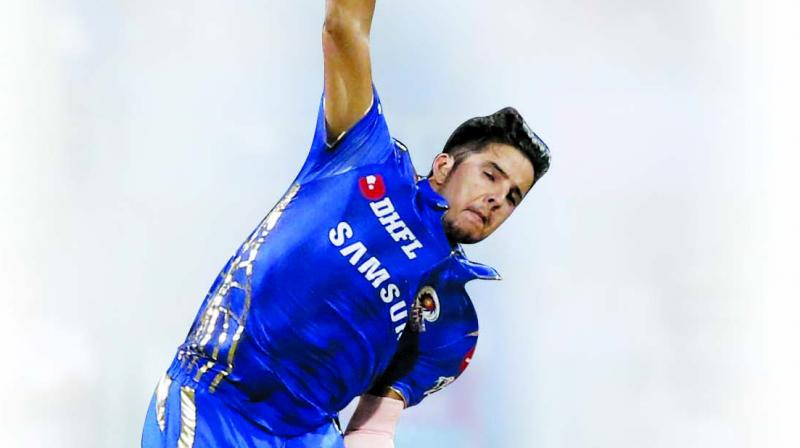 Mumbai Indians think-tank surprised many by handing rookie pacer Rasikh Salam Dar IPL debut in their inaugural game of this Indian Premier League campaign against Delhi Capitals at Wankhede stadium on Sunday. The 17-year-old right-arm pacer became the second player from Jammu and Kashmir to play a game in IPL.

“The day he came in the nets, every body was impressed with the way he swung the ball and the confidence he showed. That was the reason we wanted him to play. He swings the ball well and uses good variations,” Mumbai Indians batsman Yuvraj Singh said after the match.

“He got hit for a six and a four on his last two balls but apart from that, he was very good. He handled himself well in front of a massive crowd. The atmosphere was like international game. He is going to be special in next 2-3 years,” Yuvraj added.

Coming from Ashmuji village in Kulgam district of South Kashmir, things have turned too quickly for the talented teenager. He became overnight social media sensation in his state last year after picking a hat-trick during a game in Srinagar.

With skiddy action hitting the deck at regular speeds of around 135 kph, and having inswingers, yorkers and other variations, his reputation grew in local tournaments and was soon picked for J&K U-19 team. He was spotted by the MI scouts during the Under-19 Cooch Behar Trophy and invited for trials. Mumbai Indians later picked him from the auction for for `20 lakhs. He also made debut for his state during that while in Vijay Hazare one-dayers and Ranji Trophy.

He was around during the DY Patil T20 Cup in Navi Mumbai but couldn’t play due to thigh sprain. However, he remained in Mumbai to recover from injury and played for J&K Syed Mushtaq Ali Twenty20 trophy before joining MI camp in Navi Mumbai and later at Wankhede Stadium.

Rasikh is the youngest to debut for Mumbai Indians at 17 years and 353 days. The franchise’s director of cricket operations and former India pacer Zaheer Khan handed the cap to the player. He was welcomed by the packed crowd.

He didn’t take a wicket but affected Axar Patel’s dismissal by taking his catch to give Jasprit Bumrah first wicket of this IPL after Patel played upper cut straight to third man’s throat.

J&K team captain Parvez Rasool and former India pacer Irfan Pathan, who has joined the northern state team as a player-cum-mentor, have contributed to his growth.

Irfan and Rasool took to social media to congratulate the youngster and called it big boost for the state cricket. “He is there only becoz of his talent and hard work. Coming for the first time and played all formats (for J&K) and IPL shows how talented is he,” Rasool said.

“Wow such a great news this is for J&K cricket.Young prodigy #Rashikhsalam making his debut for @mipaltan #emotional #happy #greatfeelin,” Pathan wrote. Beigh was also happy and advised the youngster to concentrate on swing and yorkers than increasing his pace.

Rasikh showed great confidence after Rohit Sharma handed him the ball to start the proceedings. He started with a no ball but didn’t panic to concede just six runs in his first over. He bowled a peach to experienced batsman Shikhar Dhawan and also troubled Prithvi Shaw. Shreyas Iyer hit the youngster for two boundaries in his second over but he made great comeback in his third over after powerplays to keep Colin Ingram and Dhawan quiet by conceding just four runs.

When Rishabh Pant was going slam bang showing no mercy to likes of experienced international bowlers Jasprit Bumrah, Hardik Pandya and Mitchell McClenaghan, Rohit kept faith in Rasikh to bowl the penultimate over. He went for 17 runs in his last three balls of his spell to show inexperience and end with figures of 0/42. The figures weren’t too bad for a young debutant considering every other Mumbai Indians bowler had economy rate of over 10 on Sunday.