IPL 2018: Sunrisers Hyderabad cruise to yet another win 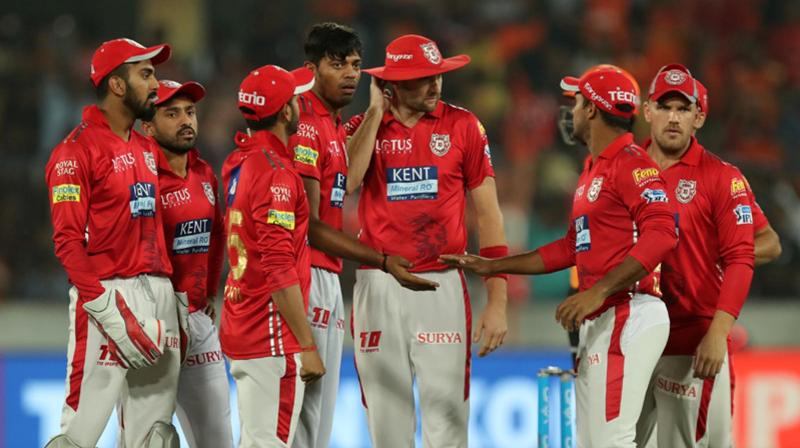 Hyderabad: Sunrisers Hyderabad continued their winning run with a 20-run victory over Kings XI Punjab in the 2018 Indian Premier League (IPL) at the Rajiv Gandhi International Stadium in Hyderabad on Thursday.

KL Rahul and Chris Gayle provided a solid start but the hosts soon found a way back into the match through Rashid Khan.

From there, Ashwin and co kept losing wickets at regular intervals as the momentum shifted in favour of SRH. The opposition bowlers fought together with a cause and cruised the team to yet another victory.

CAUGHT! Rashid turns the ball away from Ashwin. The batsman gets the bottom edge of the bat and presents a dolly to Williamson at cover.

RUN OUT! Sran is involved in a horrible mix-up with Ashwin. Another one bites the dust.

WICKET! Finch tries to smack Shakib for another biggie but finds Pandey at long on. KXIP in trouble!

LBW! Rashid spins his magic again. Karun Nair is baffled by the googly and is trapped right in front of the stumps.

WICKET! Agarwal tries to go for a big one but all he can do is find the man at long on.

WICKET! Thampi is ecstatic. Banged in short and Chris Gayle miscues his pull as the ball heads in the square leg region. The bowler calls for it and collects it.

WICKET! Rashid Khan bamboozles the Karnataka batsman with the wrong 'un and he is bowled.

FIFTY! KL Rahul and Chris Gayle have provided the perfect start. But the job is only half complete.

1st innings: Sunrisers Hyderabad set Kings XI Punjab a target of 133 to chase after being put into bat by the visitors. Manish Pandey top scored for the team with a decent half-century and now the task is upon the bowlers to deliver the goods.

It was a power play to forget for SRH as Ankit Rajpoot ran riot early on. The youngster claimed the wickets of skipper Kane Williamson, Shikhar Dhawan and Wriddhiman Saha to put the hosts in trouble.

Shakib Al Hasan and Manish Pandey then struck a fifty partnership before Mujeeb Zadran broke the stand with his mystery spin.

Rajpoot came into his final over again and removed Pandey and Mohammad Nabi to claim his best IPL bowling figures as the hosts posted a meek 132-6 on board.

WICKET! Five wicket-haul for Rajpoot. Fullish delivery and Nabi looks to get under it, finds the man at long off.

FIFTY! Manish Pandey brings up his first half-century of the season. Has managed to stay till the end but his side need some big shots from him now.

MUJEEB STRIKES! And the partnership is broken. Shakib is undone by the wrong one and lofts it high up in the air. Finds Mayank Agarwal at long on.

ANOTHER ONE! Rajpoot on fire. What a spell he's having. Banged in short again and it's a miserable pull by Saha. Presents Tye with a simple catch at mid-wicket.

Look who's on a roll here in Hyderabad.

WICKET! What a tournament the youngster is having. Short again, swinging away from Dhawan. The southpaw goes to defend and gets a thick edge that edges straight to Saha behind the wickets. Perfect start for the visitors!

AND GONE! Rajpoot gets the big fish and complete silence at the venue. Banged in short, the SRH skipper goes for a pull without putting himself in a good position. Ashwin at mid-off takes an easy catch.

Preview: After getting back to winning ways, Sunrisers Hyderabad (SRH) will aim for revenge when they face Kings XI Punjab (KXIP) in the 2018 Indian Premier League (IPL) at the Rajiv Gandhi International Stadium in Hyderabad on Thursday.

Kane Williamson and co defended a paltry 118 against three-time winners Mumbai Indians and still ended up on the winning side despite injuries to Bhuvneshwar Kumar and Billy Stanlake.

Rashid Khan and Siddharth Kaul roared back into form and much will be expected of the duo once again.

Meanwhile, KXIP have started the tournament in style, placed second in the 2018 IPL table. Chris Gayle smacked a dazzling century in the last tie and with the veteran still recovering from soreness, SRH will hope the Universe Boss continues to stay on the sidelines.

Both the sides have got a taste of each other and will be better prepared as they head into the clash.

So the news from the middle is that KXIP have won the toss and elected to field. Here's how both the teams line-up for today:

The match will take place at the Rajiv Gandhi International Stadium in Hyderabad.