Rohit Sharma should open the innings for MI: Lalchand Rajput

MI’s biggest problem has been captain Rohit Sharma's inconsistency in this edition of the IPL. 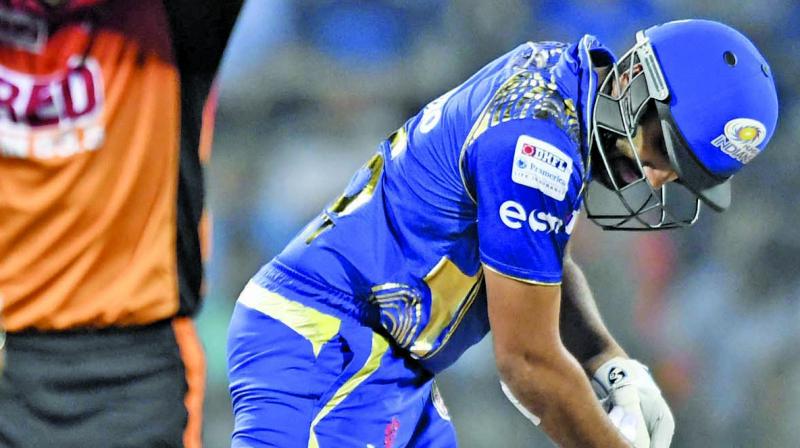 Mumbai Indians had already lost four games out of five in this year's Indian Premier League before their game against Hyderabad Sunrisers on Tuesday. However, it is the Tuesday's loss that is going to hurt them the most.

As the match started on Tuesday, the atmosphere was being built to celebrate Iconic Sachin Tendulkar's 45th birthday inside the stadium and fans were shouting famous “Sachin Sachin” chant continuously. However, the MI batsmen failed to get any inspiration. After bowlers restricted Sunrisers Hyderabad to 118, MI batsmen surrendered meekly to get all out for their lowest total of 87.

MI bowlers have tried to put up a fight in previous games and on Tuesday they gave their best performance. But the batting has been a letdown for MI and on Tuesday it was awful. They failed to show intent and build partnerships on a difficult wicket. Suryakumar Yadav has emerged as MI’s most consistent batsman as the middle order has proved to be a problem area for the defending champions.

MI’s biggest problem has been captain Rohit Sharma's inconsistency in this edition of the IPL. When he is in the mood. he can blow the opposition away. He did that against Royal Challengers Bangalore at Wankhede with the knock of 94, but he has failed to put up a show in five other games that resulted in losses.

He opened in the first two games without success. He has also opened for MI in previous seasons but later shifted to middle order to give more balance to the batting order. But many experts prefer him to bat up the order.

“Rohit should open the innings to give his side best chance. He has opened successfully with India in limited overs cricket and there is no reason why he can’t do it here also,” said former India player Lalchand Rajput who was the manager when India lifted the inaugural ICC World Twenty20 Cup in South Africa.

Kieron Pollard has been a big disappointment along with Hardik Pandya in the middle-order. The big hitters have struggled in playing shots and haven’t been able to fire in slog overs. Hardik has been exceptional with the ball in patches.

Rajput echoed MI coach Mahela Jayawardene’s comments that it was early to make changes in the team. “They are shifting there batting order too much. Few close games haven’t helped their cause,” Rajput added.

Jayawardene admitted in the post-match press conference that this loss was disappointing as in early losses MI had played good cricket.

“You need to trust your players, you can’t chop and change just because you don’t fire.  Eventually as a coach, I will have to take some calls, which I have to think about. It is too early for me,” Jayawardene said.

Former Indian batsman Vinod Kambli said though he hasn’t watched all games to comment on MI’s performances so far. But he was disappointed with Tuesday's batting performance.

MI has not tested their bench strength. JP Duminy and Adam Milne are yet to figure in playing XI while all-rounder Ben Cutting has got just one game. In-form Mumbai batsman Siddhesh Lad has been sitting on the bench now in his fourth season.

The Rohit Sharma led side has suffered five defeats in six games. They will now need a massive turnaround where they can afford no more than one loss in remaining eight games if they want to progress into playoffs. They did make it in 2015 from a similar situation and went on to win their second IPL title. Fans will have to wait and watch if they can repeat it this year.