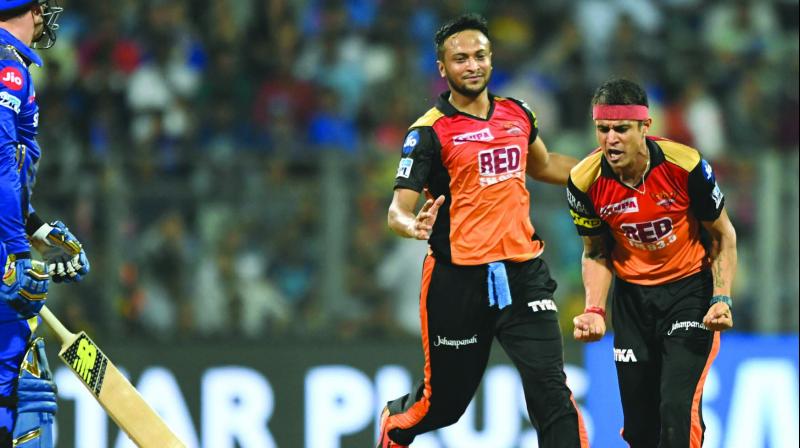 Hyderabad: The Sunrisers Hyderabad have returned home relieved after fending off Mumbai only to face another daunting task as they meet in-form Kings XI Punjab in their third match in a span of five days.

It has been quite a tough time of late for Sunrisers who lost the plot with two consecutive losses after making a strong start by winning three-in-a-row. On Tuesday night, they got the monkey off their backs by stunning Mumbai Indians in front of a packed Wankhede Stadium by defending the second lowest total ever (118) in the history of IPL.

Rohit Sharma & Co. were well on course to present a memorable birthday gift to their mentor Sachin Tendulkar but SRH bowlers turned out to be party spoilers, leaving the home crowd shattered.

KXIP are in Hyderabad after registering four wins on the trot, the last one coming against the Delhi Daredevils. With 10 points from six matches, the Ashwin-led-side has impressed with an overall show. Their faith in Chris Gayle has paid off and the big Jamaican getting runs is a threat to other teams.

Looking at SRH, their bowling unit has fired consistently. In all the four matches they won, the bowlers have set the platform for their batsmen.

In the absence of Bhuvneshwar Kumar, Sandeep Sharma has stood up to the expectation with the new ball. Basil Thampi too impressed the other night in cleaning Mumbai’s tail along with Siddarth Kaul who has nine wickets in his kitty. Rashid Khan, who was taken to the cleaners against KXIP and Chennai Super Kings, also returned home with impressive figures.

However, against the likes of Gayle, Lokesh Rahul and Aaron Finch, SRH bowlers will once again have to dig deep. Last time these two sides met, Gayle single handedly destroyed SRH’s defence by tonking a 63-ball 104 in Punjab’s victory.

Hyderabad’s biggest problem has been their batting failure and the hosts might bring in Alex Hales to solve their opening conundrum. Though SRH have revamped their middle order, old issues continue to haunt. Wriddhiman Saha, Shakib al Hasan and Manish Pandey have looked off colour. However, Kane Williamson and Yusuf Pathan have led the team’s ship from the front with some fine knocks.

Sunrisers go into the game with an 8-3 advantage against Punjab Kings, but the home side will be wary of the threat from Andrew Tye and Afghan teen Mujeeb ur Rahman in the bowling section as they set out to defend the fortress.