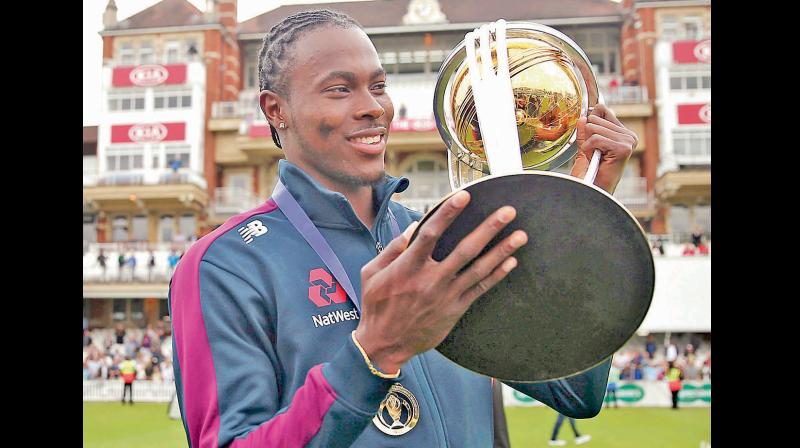 London: England pacer Jofra Archer has "gone mad" searching for his World Cup winners' medal that got misplaced while he moved into a new house which has been "turned upside down" during the coronavirus-forced lockdown.

"I had it (medal) hanging off a portrait someone did for me and sent to me, I had my medal hanging on that," the 25-year old fast bowler of Caribbean descent was quoted as saying by BCC Radio.

"I moved flat and the picture is on the new wall but there's no medal. I turned the house upside down for about a week but I still haven't managed to find it," he added.

"I know it should be in the house so I will keep eyes out for it but I've gone mad looking for it already," said the Barbados-born cricketer, who bowled the Super Over in the World Cup final against New Zealand at the Lord's.

Archer, who made his international debut only last year, said the forced break due to the Covid-19 pandemic has given him time to search for the medal.

"There's nothing else to do in isolation. It's all hands on deck," he said.

Asked what was his initial reaction when England skipper Eoin Morgan handed him the ball in the World Cup final Super Over, Archer said: "I wasn't sure until I had to go down there and warm up.

"That doesn't mean I didn't want it, I just didn't think I was in a position to volunteer. I was just coming into the team, I'd played the least amount of games in the squad. I didn't think it was my time to volunteer," he said.

"It was the only Super Over of the whole tournament, I never actually thought about it or planned for the situation, it just happened."