The India skipper said that he has been part of ODI set up for long and his presence gives side the leverage of adding an extra bowler. 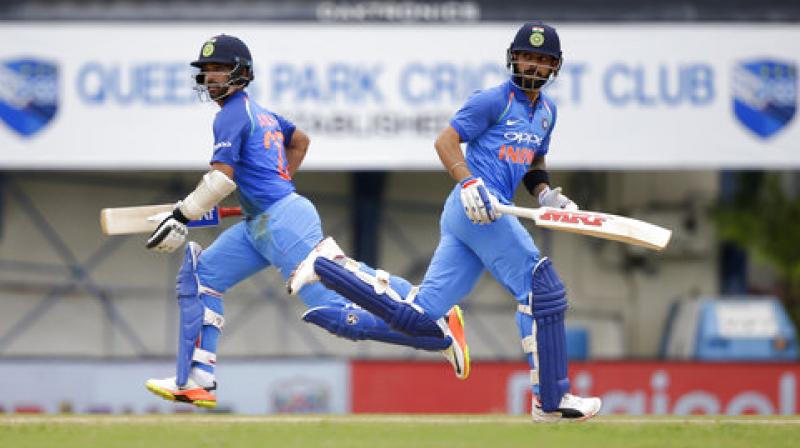 Port of Spain: A blistering ton by stand-in opener Ajinkya Rahane on Sunday guided India to a comprehensive win against the West Indies in the second one-day international between the two sides at the Queen's Park Oval here on Sunday.

Speaking to reporters after the team's win , skipper Virat Kohli praised Rahane, saying that he has been part of the ODI set up for long and his presence gives the side the leverage of adding an extra bowler.

Put in to bat first, Rahane and his opening partner Shikhar Dhawan (63) stitched a 114-run partnership for the first wicket to inspire India to an imposing target of 310-5 in 43 overs. Rahane completed his third ODI century in the 34th over before being dismissed soon after.

Pointing out that Rahane has the quality to open and play in the middle-order, Kohli insisted that he could see the former providing greater balance to the side than anyone else.

"Rahane has been a part of the ODI set-up for a while and we all felt he had a great potential at the top of the order. He is always there as the third opening batsman. In this series, I think he has started taking a lot less pressure on himself and has begun enjoying his game more," Kohli said.

"There are very few people who can perform two roles for the team. He can open and he can play in the middle-order. So, I see him providing more balance to us as a side, like we can take an extra bowling option when he is there," he added.

In reply, West Indies failed to counter the bowling attack and were restricted to 205-6 in the allotted overs, thus handing a 105-run win to India.

On Kuldeep Yadav's bowling spell, Kohli said, "I have faced him in the IPL. He's quite amazing with what he does with the ball, especially on dry wickets like it was today (Sunday), he becomes even more lethal. Credit to him for putting up such a performance."

Kohli further credited the team's determination to convincingly defeat the West Indies on their home turf.

"For us as a team, it's about doing the things right that we can do right, execute our skills to the best of our potential and regardless of how the opposition reacts, we want to do our things right, stay committed on the field be it batting, bowling or fielding," he said.

India, who have now taken a 1-0 lead in the five-match series, will play their third ODI against the Caribbean side at the Sir Vivian Richards Stadium in Antigua on June 30.