Sports   Cricket  26 Jun 2019  'I don't see why Mitch and I can't play in the same eleven', says Behrendorff
Sports, Cricket

'I don't see why Mitch and I can't play in the same eleven', says Behrendorff

Behrendorff was brought into the side for just his eighth ODI due to England's historic struggles against left-arm pacemen. 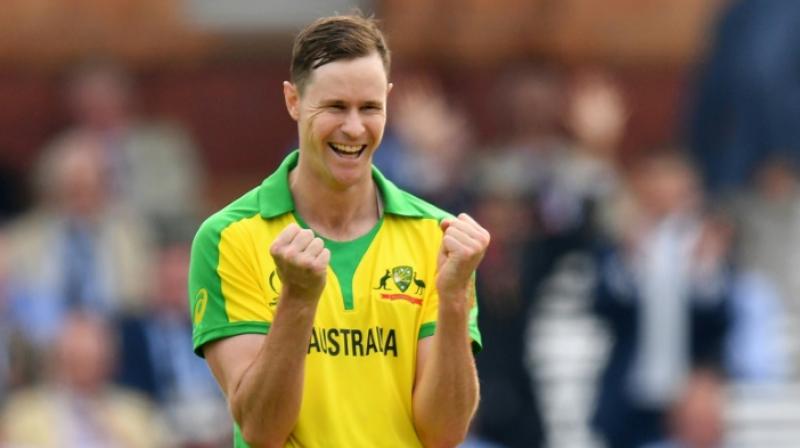 The 29-year-old took his maiden international five-for thanks to figures of 5/44. (Photo: AFP)

London: Jason Behrendorff doesn't see an issue if left-arm pacers like him and Mitchell Starc feature in the Australian playing eleven more often, especially after the duo's match-winning performances against England in the World Cup here on Tuesday.

Behrendorff was brought into the side for just his eighth ODI due to England's historic struggles against left-arm pacemen and that decision proved a masterstroke at Lord's.

And although this was just the second ODI in which they have appeared together, Behrendorff is now keen to continue his burgeoning new-ball combination with Starc.

"We don't often see it but I don't see why we can't play together," he said.

"Sometimes you play three right-armers, so why can't we play two lefties? Mitch and I have different roles throughout the team, so it's really good that we could partner together. It's something we thought was going to work well against England and then we picked up nine wickets between the two of us, so it potentially worked quite well!"

"Mitch and I are really happy to be able to play on the same team together and to have two lefties, hopefully, we could see more of it. That would be great. One of those things you dream of as a kid is to play cricket for Australia and then to come here and play at Lord's for the first time was something special.

"You don't play cricket for the accolades but to play at Lord's and to take five wickets was really special."

The victory means Australia are the first side to rubber-stamp their place in the knockout stages, with six wins from seven.

England's hopes though are on a knife-edge with must-win games to come against India and New Zealand after they suffered their first back-to-back ODI defeat on home soil in four years.

Even though their semi-final place is secure Behrendorff is eager to keep building momentum in the remaining group-stage fixtures and also doesn't believe Australia should be considered favourites to lift the trophy.

"I don't think we're the team to beat," he said ahead of concluding group stage matches with New Zealand and South Africa.

"The competition is still very open. England are still a great side and they are probably still favourites, with it being in their home country.

"We aspire to continue just playing good cricket but I don't think we're favourites, that's for sure."