Dhawan made a strong comeback scoring a career-best 190 in a blazing 168-ball knock Which consisted of 31 boundaries. 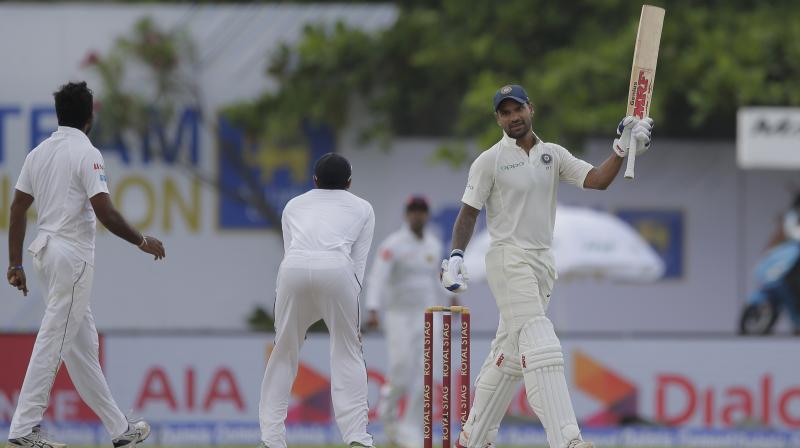 Dhawan was on 31 at the time when his catch was dropped by Asela Gunaratne off Lahiru Kumara bowling and the opener went on to score 190 off 168 deliveries . (Photo: AP)

Galle:  Team India have made a strong start against Sri Lanka in the 1st test as they are comfortably placed at  399-3 on the first day of the Test match.Shikhar Dhawan and Cheteshwar Pujara scored centuries to put India in commanding position.

Dhawan made a strong comeback scoring a career-best 190 in a blazing 168-ball knock Which consisted of 31 boundaries, while Pujara remained not on 144 as both batsman put on 253 runs partnership. Dhawan was on 31 at the time when his catch was dropped by Asela Gunaratne off Lahiru Kumara  bowling and the opener went on to score 190 off 168 deliveries .

Sri Lanka's cricket manager Asanka Gurusinha today rued the dropped catch of Shikhar Dhawan, saying the team paid a heavy price as India finished day one of the first Test at 399 for three.

"It is hard to appreciate bowlers' effort after you concede 400 runs in a day. India are a very strong side.

We dropped a catch of Dhawan and then paid a price. Not sure what would have happened had that catch been taken," said the manager at the press conference.

Sri Lanka suffered a double blow as Asela Gunaratne sustained a broken thumb on his left hand. He has been subsequently ruled out of the remainder of the Test series and the hosts will be playing this game with just 10 players.

"It was a double blow. We dropped the catch and lost a player," said Gurusinha. "It's sad. He will undergo a surgery in a short while. Most probably he will be out for a minimum of four weeks.

We will know in the next 48 hours about the time frame. He has fractured his thumb in three places. As soon as we saw the x- rays we knew it was very serious and we rushed him to Colombo," the manager added.

The Lankan bowling attack came a cropper as it simply failed to contain the Indian batsmen, particularly Dhawan who punished them with 31 fours and scored at a rate in excess of 100. "We know Dhawan wasn't in the initial squad but then he came back into the side and showed the selectors what he is capable of. It was a good track for him and we also ended up bowling to his strength, and he capitalised on that," said Gurusinha.

"But we have to be honest that we didn't bowl well. Nuwan Pradeep was the only outstanding bowler I thought. It's a really good batting wicket. I heard Virat (Kohli) talking that it is a good batting wicket. We bowled on both sides of the wicket as well. Dhawan just took over the game.

His 190-run knock was one reason we find ourselves in this situation." However, Gurusinha expressed confidence that his batsmen could still turn the game around with a good show.

"They will recall the manner in which Lanka beat India turning around a similarly dominant performance from the visitors on day one of the series back in 2015. You never

know. This is Galle and after scoring 600 runs you can still lose a Test match.

"Our batsmen have to just to go out and play good cricket. Let's see what happens in the last two days. We need to first try and get India out tomorrow. We will probably bat