Indians turn up the heat 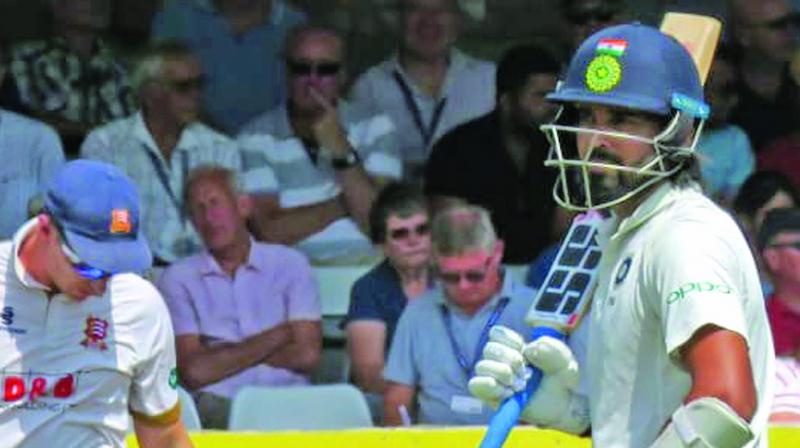 Opener Murali Vijay made 53 against Essex in the first innings. (Photo: BCCI)

Chelmsford: India began their warm-up for the challenging England Test series on a positive note in a tour match against Essex on Wednesday.

India XI opener M. Vijay, Virat Kohli and K.L. Rahul scored half-centuries as India XI were 244/5 shortly after tea. Kohli, who made 68 off 93 balls with 12 fours, and Murali Vijay, 53 with seven fours from 113 balls, gained the necessary preparation in the middle.

The tour match at Chelmsford was truncated to three days with temperatures expected to soar to a draining 30 Celsius.

Essex chief executive Derek Bowden dismissed the speculation that the quality of Essex’s pitch led the BCCI to curtail the match.

“The outfield is not unsafe and the decision has nothing to do with that. The reason the game has been cut to three days is because of the heat and the very busy schedule for the Test series,” Bowden is quoted as saying by the Telegraph.

“We had a meeting with the ECB, the BCCI this morning and agreed to cut short the match...”

India will travel to Edgbaston on Saturday to prepare for the first of their five-match series against England, which begins on August 1.

Meanwhile, India received a significant boost with pacer Jasprit Bumrah making a return to bowling in the nets. The Mumbai pacer injured his thumb during India’s T20 tour of Ireland earlier this summer and has been out of action ever since. Bumrah was facing a race against time to get fit for the opening Test.