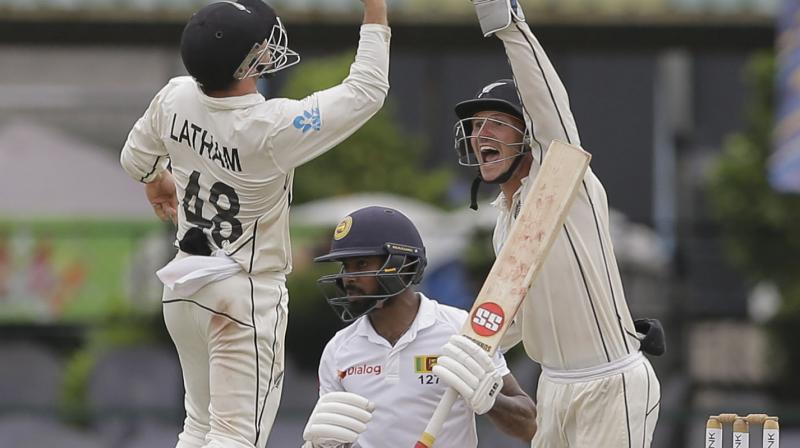 Needing 187 runs in the second innings to make New Zealand bat again, Sri Lanka was bowled out for 122 runs in the final session despite a fighting 51 off 162 deliveries from wicket-keeper Niroshan Dickwella. (Photo:AP/PTI)

The match was curtailed by rain for most part but New Zealand played positive cricket to force a result. Sri Lanka started the last session at 88 for seven hoping to salvage a draw, with Dickwella batting with purpose and joined by defiant tailender Suranga Lakmal. New Zealand captain Kane Williamson used some aggressive field placings, sometimes placing as many as five fielders around the bat.

The tactic paid off when Lakmal (14 from 45 balls) gloved a catch to batsman Tom Latham - who hit a fine 154 in New Zealand's innings - at forward short-leg. Crucially that dismissal ended a 41-run partnership in 132 balls between Dickwella and Lakmal, batting at No. 9. Dickwella tried to sweep spinner Ajaz Patel and was also caught by Latham, close to the bat. Fast bowler Trent Boult bounced at No. 10 batsman Lasith Embuldeniya whose evasive play resulted in a catch to Williamson at third slip, taking New Zealand over the line to victory.

In the first session, Kusal Perera opened the batting with Lahiru Thirimanne because of Karunaratne's extended stay off the field with an injury during New Zealand's innings. Thirimanne was run out before Sri Lanka had scored and Kusal Perera (0) was caught behind by BJ Watling off paceman Boult, leaving Sri Lanka two down for four runs.

Sri Lanka lost its third wicket with the total 11 when Angelo Mathews (7) fended an outswinger from seamer Colin de Grandhomme to Ross Taylor at slip.
Dhananjaya de Silva (1), who scored a century for Sri Lanka in the first innings, stepped out against left-arm spinner Ajaz Patel to drive on the on side but only managed to give a catch to Southee at slip.

William Somerville bowled Kusal Mendis for 20 runs, with an impeccable off spinner. The well-flighted delivery drew the right-hander forward outside off stump to defend and the ball turned sharply after pitching, sneaked through bat and pad to hit off stump. Karunaratne made 21 before being trapped lbw by fast bowler Tim Southee bowling round the wicket with the total on 73. He reviewed the decision unsuccessfully.

Dilruwan Perera departed without scoring, caught by Ross Taylor off Southee.
Southee returned best bowling figures two for 15. Boult, Patel and Somerville also took two wickets each. The New Zealanders batted for 25 minutes earlier Monday before declaring at 431-6, having added 49 to their overnight total. Sri Lanka made 244 in its first innings

De Grandhomme was out for 83 on the second delivery of day five, without adding to his overnight score, when he was caught off left-arm spinner Lasith Embuldeniya's bowling.He faced just 77 deliveries and smashed five sixes and five boundaries to give New Zealand the advantage. Watling posted his seventh test century and remained unbeaten on 105, including nine boundaries.

Southee hit two sixes and two boundaries to reach 24 in a 10-ball cameo. Off spinner Dilruwan Perera returned 3-114 and Embuldeniya was even more expensive with 2-156. Sri Lanka won the first test by six wickets in Galle against 2019 World Cup runner-up New Zealand.