Sports   Cricket  26 Aug 2019  'There will be opinions but we do keep best interests of team in mind', says Virat Kohli
Sports, Cricket

'There will be opinions but we do keep best interests of team in mind', says Virat Kohli 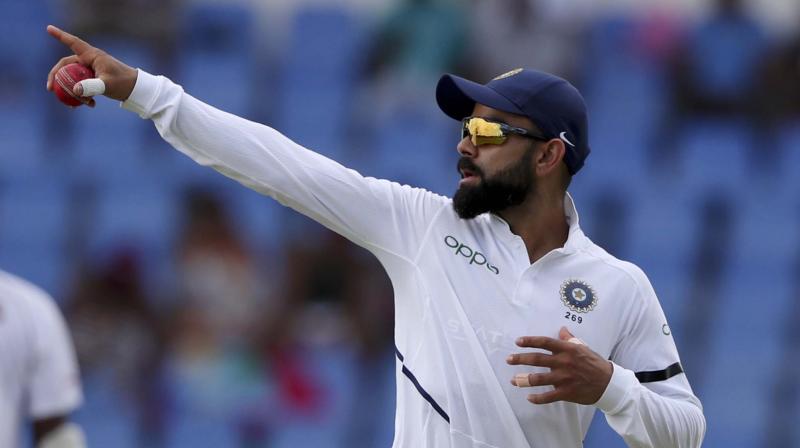 Captain Virat Kohli insists that all decisions are taken keeping in mind the "best interests of the team". (Photo: AP/PTI)

North Sound (Antigua): Captain Virat Kohli is well aware that India's playing XIs in Test matches are a subject of intense debate but insists that all decisions are taken keeping in mind the "best interests of the team".

India thrashed West Indies by 318 runs in their inaugural World Test Championship encounter but at the onset, there was a debate on the omission of senior off-spinner Ravichandran Ashwin. The legendary Sunil Gavaskar termed his exclusion as "astonishing".

But the lone specialist spinner Ravindra Jadeja did his bit, scoring a timely half-century in the first innings along with a couple of wickets vindicating Kohli's decision.

"We have a group discussion and then we decide what's best for the team. There will always be opinions about the XI, but people will know that it's in the interest of the team," Kohli said at the post-match presentation ceremony.

Kohli's preference for the young Hanuma Vihari over limited-overs vice-captain Rohit Sharma also worked wonderfully with the Andhra Pradesh-player scoring 93 in the second innings after looking good during a 32 in the first essay.

"Vihari got a nod because the combination is important. He's an effective part-time bowler and helps us when we need to catch up with the over-rate."

Just like white-ball cricket, Jasprit Bumrah's form and fitness are paramount in the red ball set-up also. And the captain understands that only too well.

"Bumrah's workload is most important which is why he didn't play any white-ball games (vs WI) after the World Cup. He will be a key factor for us as long as the World Test Championship continues.

"Shami is the same and Ishant is a banker, always reliable. Umesh is there too and Navdeep is waiting in the wings. We are settled as our bowling options, but managing workloads will be important," Kohli said.

He was all praise for man of the match Ajinkya Rahane, who is back in form with scores of 81 and 102 in both innings.

"Jinx excellent in both innings, KL solid in both innings too. Mention to Vihari too. We had to come back in this game 3-4 times, so that is a positive moving forward from Australia," said the skipper.

Kohli said he is happy to be in a position where he has a team which is executing most of the decisions taken by him.

"I am taking decisions, yes, but execution is done by others who raise their hand. We enjoy everyone's company, and that's the reason for our success," he said.

"It's a blessing that I am in a position where I can contribute to the team in more than one way, but nothing is possible without your team. I don't think the credit can be taken away from the team at all."

The skipper expects that his team will put up another professional performance in Jamaica, starting on Friday.

"Jamaica is another opportunity to do a professional performance. We know WI will come hard at us, and we will try to plug the gaps from this Test."

His opposite number Jason Holder admitted that he is faced issues with regards to batting that need to be sorted.

"Bowlers did a good effort, but we didn't bat well. Batting issues to sort, going on for too long. Top order is not doing well, leaving much for the middle-order to do. The wicket was a good one and we should have batted better," Holder said.

He praised Rahane's efforts in both innings.

"Ajinkya batted really well and everyone batted around him. It was a difficult wicket to blast players out."

Holder, however, said that he had nothing to say about team selection.

"I wouldn't question the team selection. We played the same combination in the last series and we did very well. I think we've got to blame our batting performance. We could've put up a much better performance.

"In hindsight, you can say a lot of things, but we players need to take more responsibility. (Jasprit) Bumrah bowled really well, one of those spells that will dislodge most top-order players. That said, we need to be a lot better as a batting unit."

He does expect a better show in the next game in Jamaica.

"For Jamaica, it's a place we have found success and our players have done well. Hopefully we can do that."