Sports   Cricket  26 Sep 2019  Rishabh Pant will get back his mojo, don’t push him
Sports, Cricket

Rishabh Pant will get back his mojo, don’t push him

A critical look at his batting would throw forth the analysis that he tends to mishit in the air early in the innings. 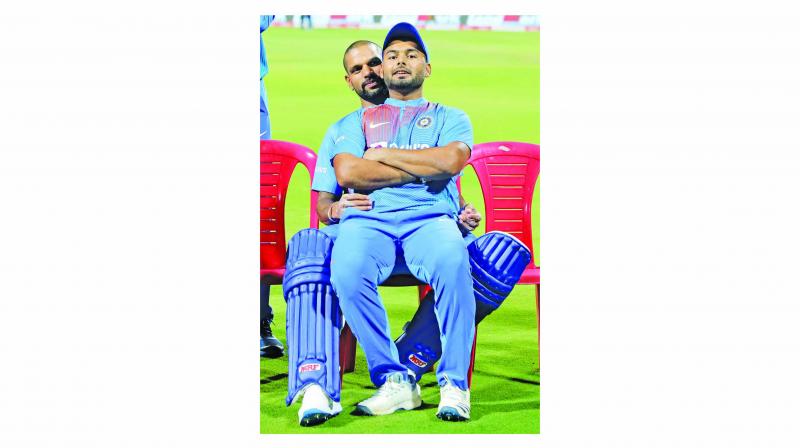 They have left young Rishabh Pant thoroughly confused. The talented batsman-keeper will be wondering if he should ever hit the ball hard again. The GenNext batsman with all the credentials for modern age cricket with the red and white balls has been put in an awkward position from an excessive analysis of his shot selection. Poor as his stroke selection has always been, he is being pushed so hard it would be no surprise if he folds under pressure.

A critical look at his batting would throw forth the analysis that he tends to mishit in the air early in the innings. Instead of trying to talk to him on how to be wiser at the crease, he is being pressured through menacing warnings that he would be dropped if he did not heed. And, as it invariably happens under pressure, he mishit twice in two T20is and is looking terribly vulnerable in his career.

Any more misadventures by the bright batting prospect, who began his Test career with a six, and Team India would not hesitate to go right back to Mahendra Singh Dhoni. No one would hold anything against Dhoni because he has contributed so much when he was younger. As an abler batsman he became the finest finisher in the game after that end game player of such certitude that he never seemed to make a mistake in the face of a target — Michael Bevan.

While a nice kind of farewell game or series would be apt for Dhoni, it might be stretching things if we were to think of him as the keeper-batsman for the T20i Worlds in Australia next year. If a younger and better ‘keeper than Pant is sighted, it might be nice to see him given a place, but to go back to Dhoni for one more T20i Worlds 12 years after his first in 2007 would be a bridge too far. Time waits for no man, not even such a clever user of his resources like Dhoni.

The fact that Team India never recaptured the magic of that first World T20i should not be held altogether against Dhoni. He led the team on into more T20i Worlds but no combination proved capable of stunning the world like the first one did. The ‘will he play or not’ wait on Virender Sehwag ruined the effort in England that followed the successful one in South Africa. The next one in the Caribbean was an absolute washout and even when we came near enough again winning the cup later, it was not to be.

It’s arguable whether Indians lost that wonderful capacity to attack as never symbolised better than in Yuvraj Singh’s six sixes in an over of Stuart Broad. That kind of magic may not happen more than once in a lifetime. But the general bustling aggression you need to win a T20i and the ability to keep the nerve while doing so has not been sighted in a Team India again. The hard wickets of Australia might make it even harder for Virat Kohli’s men in 2020.

Any coach worth his salt would advise Pant that the only thing wrong with his cricket is his early aggression in which he finds himself compelled to take the aerial route. If his shot selection were to improve to the extent that he knocks the ball around more thoughtfully early on as he tried to in Bangalore before he succumbed to the big shot again, Pant might live up to his potential. There is scope even for a middle distance horse in a sprint if the preparation and tactical thinking are right.

Team India have invested much time in Pant and to let him go now would be a waste of the efforts of grooming a rare talent. All attacking batsmen face this problem of analysts trying to make them dumb down their attacking instincts in order to score more. But in Pant’s case, a little more patience might be advisable so that he might unleash his ability to clear the ground when he has built himself into a platform from where outright aggression could come without inhibition and with more precision in converting intent into stroke. And who better to talk to than Delhi colleague Virat Kohli who could teach him a thing or two about shot selection!