Devdutt Padikkal, leading run-scorer in the tournament was undone by a peach of a delivery from Sundar for 11. 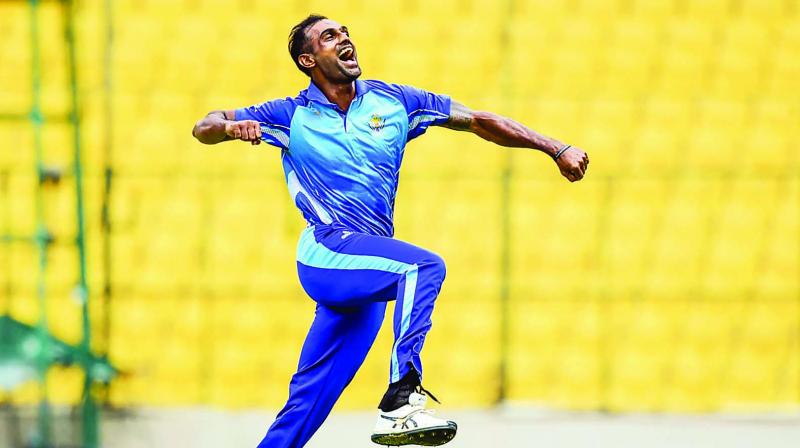 Abhimanyu Mithun celebrates his hat-trick against Tamil Nadu in the final of the Vijay Hazare trophy. (Photo: PTI)

BENGALURU: Manish Pandey led Karnataka side clinched the  Vijay Hazare Trophy defeating Tamil Nadu by 60 runs through the VJD method in a rain-affected final at the M.Chinnaswamy Stadium on Friday.

When rain halted proceedings after 23 overs, the hosts were 146/1 chasing a target of 252 with the par score being 86 runs at that stage with KL Rahul and Mayank Agarwal batting on 52 and 69.

The victory though was set up by the Karnataka bowlers with birthday boy Abhimanyu Mithun who did the major damage with the ball after Manish Pandey won the toss and opted to field. A hat-trick and a five-for (5/34) on his 30th birthday restricted Tamil Nadu to 252 after being 148/2 at one stage.

Chasing a below-par target of 252, both the spinners leaked runs with the new ball and made the task easier for the Karnataka openers. Devdutt Padikkal, leading run-scorer in the tournament was undone by a peach of a delivery from Sundar for 11.

Mayank, who is having a purple patch with the bat looked fluent from the beginning as he hoisted Vijay Shankar for a six towards the cover region in the second over of his spell. Left-arm seamer T Natarajan was driven twice by Mayank in the same over signalling intent from the Karnataka batsmen. Captain Dinesh Karthik tried all his resources but couldn’t mitigate the quick run flow by Karnataka batsmen.

Mayank reached his 30th List-A fifty with a cracking whip towards the offside as Karnataka got past 100 in the 16th over.

Tamil Nadu got a few opportunities to break the partnership but luck favoured the hosts as Rahul was nearly run out at the non-striker’s end when a straight hit from Mayank ricocheted on to the stumps after coming in contact with Ashwin Murugan’s hand. Rahul’s fifty came off 72 balls with five boundaries when rain stopped play.

Earlier, Tamil Nadu could not capitalise on the 124 run partnership for the third wicket between Baba Aparajith and Abhinav Mukund as they lost wickets at regular intervals. The ploy to send R Ashwin up the order failed to pay dividends as he was dismissed for eight after Murali Vijay was dismissed for a duck by Mithun. Vijay Shankar came ahead of Dinesh Karthik and provided the impetus which lacked in the first half of the Tamil Nadu’s innings. Lack of communication between Vijay and Aparajith resulted in the latter’s run-out after making an 84ball-64, later his skipper followed him back to pavilion for a score of 11. It was Shahrukh Khan and Shankar’s attacking batting which let the team score past 250. Mithun claimed his hat-trick in the final over as the Tamil Nadu batsmen were dismissed trying to slog it out.