Shah, who dismissed the Australian batsman, celebrated his scalp by displaying ‘seven’ with his fingers. 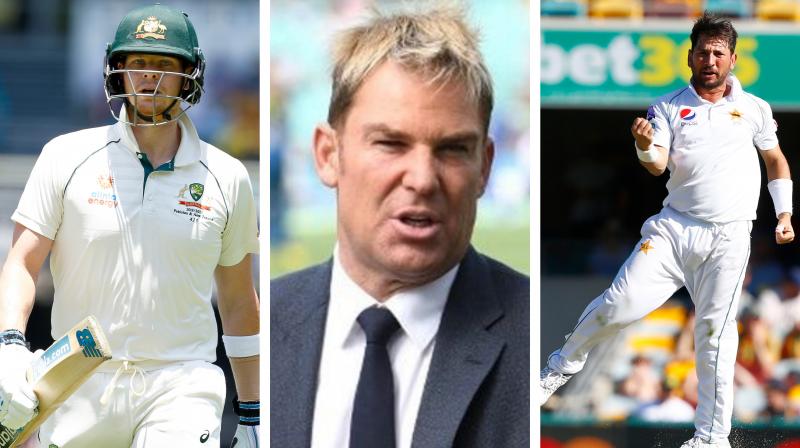 The man behind Smith’s dismissal is not Yasir Shah. Actually, Shane Warne was the man, who helped Yasir Shah in getting the valuable wicket of the right-hander. (Photo:AP/AFP)

Mumbai: During the first Test match against Pakistan, the Australians put on a collective effort to crush and win the game by an innings and 5 runs, despite the valiant efforts from Pakistan’s centurion Babar Azam and wicket-keeper batsman, Mohammad Rizwan. Australia were brilliant with the bat and bowl.

For Australia, the most important thing was seeing David Warner get back to form, especially after his poor show during the recently Ashes. However, one man failed to score during that match, and that man is none other than Ashes’ top scorer, Steve Smith.

Smith, who amassed a phenomenal 774 runs at an incredible average of 110.5, managed to score just four during the match against Pakistan. The Ashes highest run-getter was clean bowled by Pakistan’s leg spinner Yasir Shah.

However, the man behind Smith’s dismissal is not Yasir Shah. Actually, Shane Warne was the man, who helped Yasir Shah in getting the valuable wicket of the right-hander. Shah, who dismissed the Australian batsman, celebrated his scalp by displaying ‘seven’ with his fingers, indicating that he had got the Aussie out seven times in the Tests.

After the unorthodox batsman’s rare error, former England captain Michael Vaughan, who was a commentator during the match, said the leg-spinner has learned the trick to dismiss the former Australian captain from legendary spinner, Shane Warne.

The International Business quoted the former England captain, who stated, “Last night Shane was walking out of the hotel when the Pakistan bus arrived. After a selfie with them all, Shane was in the middle of them all and he had a nice conversation with Yasir Shah and he advised the leg-spinner to bowl a little bit straighter.”

Warne also disclosed that he spotted the Pakistani spinner’s talent way back in 2014. “I just had a chat and spoke to him about the things I spoke about this morning, bowling a bit straighter, getting your field right and challenging the front pad and the stumps rather than bowling wide of off stump,” stated Warne.