MS Dhoni to retire? Ravi Shastri has his say 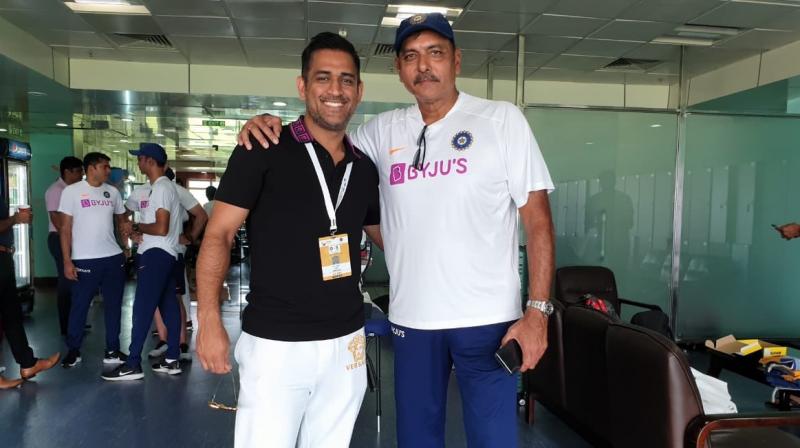 Ravi Shastri said that there is no need to specualte on MS Dhoni retirement. (Photo: BCCI)

Mumbai: Ever since India was ousted from 2019 World Cup, there have been several speculations floating around regarding Mahendra Singh Dhoni’s retirement. People thought that he would retire after the world cup was finished, but that’s not the case as things are still not clear. Meanwhile, Ravi Shastri has done a pretty good job with the team in his hands with three series wins on the trot.

Ravi Shastri spoke to IANS on a range of topics, varying from MS Dhoni and Rishabh Pant to current BCCI president Sourav Ganguly. He also talked about what kind of an impact the World Cup exit had on the team and how they managed to get to this position and keep up the consistent performances.

He said, “For me, the intensity shown by this team is fabulous. The way they have bounced back after those 15 minutes in Manchester. That was a bitter pill to swallow and hurt one and all. But then, the ferocity and intensity they have shown after that in the last three months is unbelievable. This is remarkable and that is why I say if you look back 5-6 years, this will have to be one of the most consistent Indian teams ever across all formats.”

Speaking on MS Dhoni’s retirement speculations, he said, “It all depends on when he starts playing and how he is playing during the IPL. What are the other people doing with the wicket-keeping gloves or what is the form of those players as opposed to Dhoni's form. The IPL becomes a massive tournament because that could be the last tournament after which more or less your 15 is decided.”

He added, “There might be one player who might be there and thereabouts in case of an injury or whatever. But your team I would say would be known after the IPL. What I would say is rather than speculating of who is where, wait for the IPL to get over and then you are in a position to take a call on who are the best 17 in the country.”

Rishabh Pant has also been a hot topic of discussion between cricket fans, mostly due to his inability to perform well in recent matches. When Shastri was asked about what suggestion he shares with the youngster, he said, “Nothing. Just tell him that you are young and nobody expects you to learn everything in one day."

He added, "You are bound to make mistakes, but as long as you sit down and think about ways to rectify those mistakes, you know that is what this game will teach you. You are not going to be a superstar in one day. You will have your ups and your downs. That is life, but the more you work harder, the more the sacrifices you make, the better you will become.”

There have been instances where Ravi Shastri and Sourav Ganguly have been at loggerheads with each other. But it feels that both have let bygone be bygones as they now share a mutual admiration for each other. Ravi Shastri had a few words to say on Ganguly being appointed as BCCI president.

He said, “I think it is fantastic (Ganguly’s appointment). I was one of the first to congratulate him when he became the President because I was delighted that more important than anything a BCCI was back in place to put Indian cricket where it belongs both on and off the field. And I was even more delighted that a cricketer should be at the helm at this important phase of Indian cricket.”

He added, “And Sourav having been a fabulous player and captain and been around as an administrator, him becoming the President adds a lot of value.”