Boxing Day Test: Australia end day one at 257/4 against NZ

Steve Smith and Travis Head are still unbeaten at the individual scores of 77 and 25, respectively. 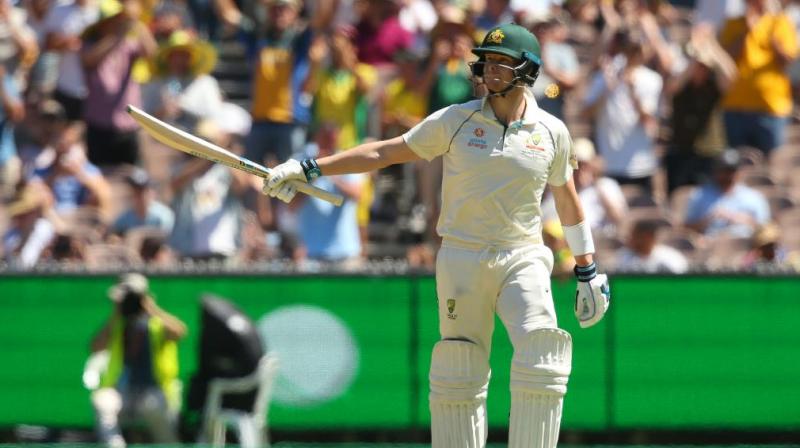 Australia ended day one at 257/4 on Thursday against New Zealand in the ongoing Boxing Day Test here at the Melbourne Cricket Ground (MCG). (Photo: ICC/ Twitter)

Melbourne: Australia ended day one at 257/4 on Thursday against New Zealand in the ongoing Boxing Day Test here at the Melbourne Cricket Ground (MCG).

Steve Smith and Travis Head are still unbeaten at the individual scores of 77 and 25, respectively. With this innings, Smith surpassed Greg Chappell to become the tenth highest scorer for Australia in the longest format of the game.

The day one of the match also witnessed the largest-ever crowd for a match between Australia and New Zealand. A total of 80,473 people witnessed the Boxing Day spectacle at the MCG.

After being sent into bat, Australia got off to the worst start possible as Joe Burns (0) was clean bowled in the first over of the innings by Trent Boult. David Warner and Marnus Labushchagne then put up a 60-run stand to ease the nerves in the Australian camp.

However, just on the cusp on lunch break, New Zealand managed to get the breakthrough of Warner (41) as he was dismissed by Neil Wagner in the 22nd over, reducing Australia to 61/2.

Steve Smith, next came out to bat and he along with Labushchagne helped in retrieving the innings for the hosts as the duo stitched together a partnership of 83 runs. Colin de Grandhomme finally dismissed Labushchagne (63) in the 50th over. Australia went into the tea break with a score of 157/3.

Smith, then found support in Matthew Wade and both batsmen put up a stand of 72 runs for the fourth wicket. However, with Australia at 216, de Grandhomme had Wade (38) caught at the hands of the wicket-keeper BJ Watling.

Travis Head joined Smith in the middle and the duo ensured that the side does not lose any more wickets before the close of play on day one.