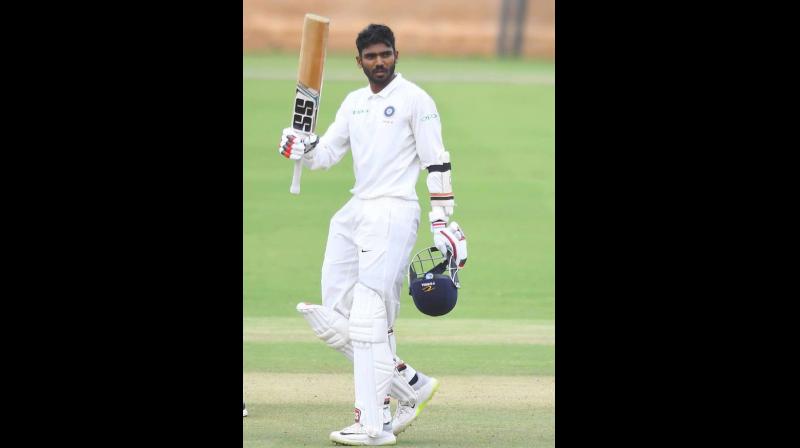 For a good part on a foggy Tuesday afternoon, last week, Andhra team member Kona Srikar Bharat was engrossed in his match against Mumbai for the Syed Mushtaq Ali Trophy. After returning to his room, however, the cricketer was surprised to see his cell phone inundated with congratulatory messages. He had been selected in Team India for the forthcoming series against England.
“I was overwhelmed,” remembers Bharat, adding that watching youngsters performing well in the recently concluded series against Australia had given him great confidence. “Having played for India A for over three years, I’ve been waiting for my time, although, honestly, I did not expect the call,” he says.
Of course, the spirited youngster hopes to focus on being fit , staying positive and ready for the series against England. “Playing for the country is what everyone dreams of and playing at the highest level is something for which we cannot even express the adequate joy and pride. This is the moment every youngster would like to live for,” adds Bharat on what it means to him to be playing for the country.

A welcome to remember

Bharat was included as a part of the Test squad for the Bangladesh series as a cover for Wriddhiman Saha in November 2019. However, he did not have to take the field then. But the player has fond memories of being a substitute in that team too.
“I still remember when Virat bhai handed over the trophy to me; it was his way of welcoming me into the team. It was a great gesture from him, and Rohit bhai (Rohit Sharma) asked me to enjoy the moment,” he recalls.
That obvious joys and sense of being included aside, being taken as a part of the squad is a milestone unlike any other for any cricketer. So did his recent wedding to Anjali in August 2020 bring him the blessings of lady luck, we ask, teasing him.
Aptly blushing, Bharat says, “May be. She has always been instilling positivity.”

Gratitude for the support

While his family and wife’s support has been constant, Bharat considers the encouragement by former cricketing legend and India-A coach Rahul Dravid instrumental in his growth.
“During our India-A stint, we played a lot under Rahul sir, and we picked up a lot from him. Playing while he is watching gives you a different high. He always tells us to keep it simple, and his influence over the years has been great,” shares expressing his gratitude to his Andhra coach Krishna Rao’s tips .