India on verge of victory in Dharamsala as Australia collapse

At stumps, India were 19-0, needing another 87 runs to win the test and the Border-Gavaskar Trophy. 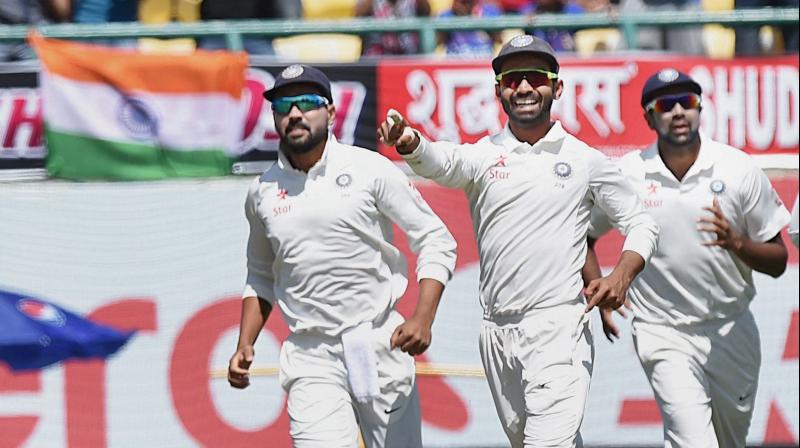 The four-match series is pegged at 1-1. Australia won the first test in Pune by 333 runs, while India won the second in Bengaluru by 75. The third test in Ranchi was drawn. (Photo: PTI)

Dharamsala: India are on the verge of a series victory on Monday after Australia collapsed to 137 all out in their second innings and at the close India needed just 87 to win a series victory with 10 wickets to spare.

Ravichandran Ashwin and Ravindra Jadeja (3-24) shared six wickets as Australian wickets tumbled on a fizzing wicket in their second innings on day three of the fourth test. Umesh Yadav also took 3-29 as India were left with a 106-run target.

At stumps, India were 19-0, needing another 87 runs to win the test and the Border-Gavaskar Trophy. Lokesh Rahul was unbeaten on 13, while Murali Vijay was 6 not out.

Australia lost five wickets on either side of tea. After tea, Glenn Maxwell (45) was the first to go, as Ashwin trapped him lbw.

Mathew Wade (25 not out) and Pat Cummins (12) then added 15 runs for the seventh wicket, before Jadeja had Cummins caught at slip.

Jadeja then had Steve O'Keefe (0) caught at short leg. When Nathan Lyon (0) edged Umesh Yadav to second slip, Australia had lost three wickets for one run in the space of 18 balls.

There was drama before the last wicket fell. Murali Vijay claimed a catch at slip off Ashwin in the 54th over, but replays showed that he possibly grassed it. The batsmen were called back, but two balls later, Ashwin trapped Josh Hazlewood lbw for a duck.

Australia were reduced to 92-5 at tea. Umesh Yadav had David Warner (6) caught behind and he also accounted for Matt Renshaw (8), also caught behind.

In between, India got the prize wicket as Bhuvneshwar Kumar (1-27) bowled captain Steve Smith for just 17. The skipper, who scored 499 runs this series, played on.

Peter Handscomb (18) and Glenn Maxwell (37 not out) defied the Indian attack, as the duo added 56 runs for the fourth wicket. Maxwell played some attacking strokes, hitting five fours and a six.

Earlier, Nathan Lyon (5-92) picked up his ninth five-wicket haul in test cricket as India were bowled out for 332 runs. The hosts took a 32-run first innings' lead.

The four-match series is pegged at 1-1. Australia won the first test in Pune by 333 runs, while India won the second in Bengaluru by 75. The third test in Ranchi was drawn.