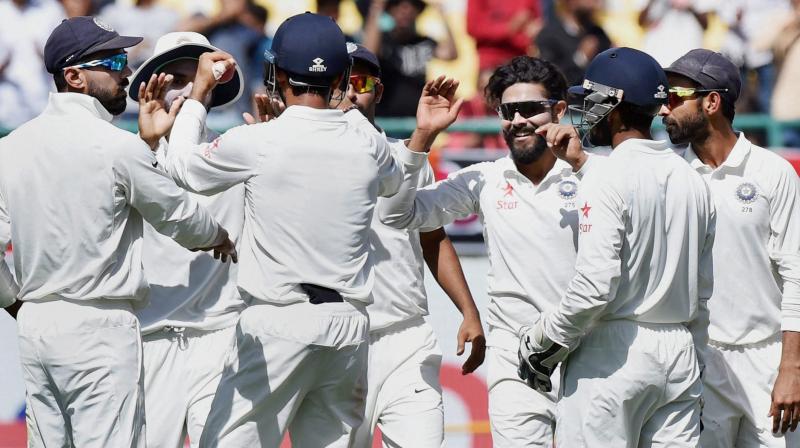 India dismissed Australia for just 137, setting themselves a target of 106 to win the match. (Photo: PTI)

Dharamsala: Cricket, above everything else, is a team sport and there’s no better sight than seeing a unit combine together to outplay the opposition. And it was one of those days in Dharmasala on Day 3 of the fourth and final Test between India and Australia.

While debutant Kuldeep Yadav took the responsibility in the first innings to bundle out the Australian batting line-up, the four senior bowlers, Umesh Yadav (3/29), Bhuvneshwar Kumar (1/27), Ravindra Jadeja (3/24) and Ravichandran Ahwin (3/29) spearheaded India’s charge against the Aussie batters in the second innings as they dismissed the visitors for just 137, setting themselves a target of 106 to win the match.

India managed a lead of mere 32 runs in the first innings after dismissing the opposition for 300, and seemed to have squandered the advantage only for the bowlers to restore the confidence and status quo.

The pace combination of Umesh Yadav and Bhuvneshwar Kumar tormented the Aussie openers as they failed to settle into their innings. While the bouncers from Umesh Yadav zoomed past the batsmen, Bhuvneshwar swung it away, presenting a tough test.

Both Warner and Renshaw fell to the impressive pace bowling by Yadav. The prized wicket of skipper Steve Smith was taken by Bhuvi off a short ball. The Aussie captain uncharacteristically played the ball onto to his stumps.

Later, Peter Handscomb and Glenn Maxwell took over the responsibility and started building the Australian innings. Maxwell attacked Indian spinners from one end, while Handscomb resumed his role from the fourth innings of third Test, where he orchestrated a draw for the visitors with a resilient innings of 72 from 200 balls.

It was pivotal for India to break the stand and R Ashwin stepped up to do exactly the same. Ashwin outfoxed Handscomb with a straight one. The batsman played for the spin but the ball held its line, inducing an outside edge off the bat. Skipper Ajinkya Rahane did the rest at first slip, and just like that, India had their fourth wicket.

Thereon, it was a Ravindra Jadeja show, as the left-arm spinner dismantled Australian lower order by picking three wickets with his accurate and deadly bowling. Having made the inroads, the bowlers made it extremely difficult for the opposition and bundled them out for 137, with the last six wickets falling for just 50 runs.

It was a valiant effort by the Indian bowling unit to dismiss all Australian batsmen on a supposedly batting-friendly pitch and a performance which has put India right on top to win back the Border-Gavaskar Trophy.