The 17-year-old Bandra girl scored her maiden international half-century against Australia at CCI to announce her arrival. 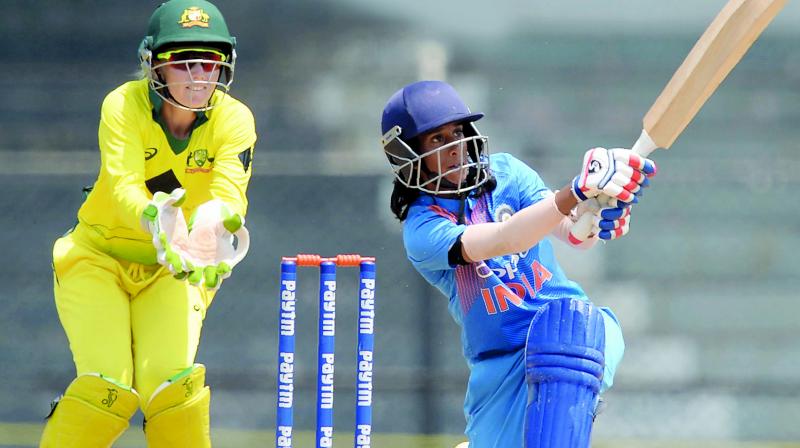 Jemimah perished while trying to up the ante after the asking rate was going beyond reach. She scored a half century.

Bandra girl Jemimah Rodrigues scored her first international fifty in the tri-series Twenty20 match against Australia at the Brabourne stadium, Cricket Club of India on Monday. The 17-year-old asked to open with Smriti Mandhana to kickstart a challenging chase of 186/5, and went on to play a matured innings of 50 runs in 41 balls with eight boundaries.

India were never in the chase and managed 150/5 in the end. But Jemimah stood up to the occasion and grabbed her chance. She didn’t panic even after Australian bowler Megan Schutt took a hat-trick and broke the backbone of Indian women’s batting, by sending back Smriti Mandhana, Mithali Raj and Deepti Sharma.

Jemimah progressed in company of her skipper Harmanpreet Kaur to keep India in the game, and took charge of it. She advanced frequently down the wicket to show her fearless attitude at a young age.

Jemimah perished while trying to up the ante after the asking rate was going beyond reach. She top scored for India with 50.

“I had to control (my game) and change the gears for me, because we were chasing and making most of the power-play. But then I had to change my mindset because three wickets had gone and Hary di (Harmanpreet Kaur) came. She told just build the partnership and carry if forth from here,” she said after the match.

“There was pressure but how we work is that one person needs to attack and the other player needed to play a supporting role. I was set and I was playing and timing the ball well. Our plan was that I will go and attack and Hary di will keep on rotating the strike and if she gets a loose ball (she will hit),” she added.

Jemimah came into the national team reckoning after scoring 202 in just 163 balls in 50-over game in Aurangabad against the Saurashtra team in November 2017. Later, she made her debut for India during the South Africa series, during a Twenty20 International game. She made her previous best of 44 there against South African women at Cape Town and made her ODI debut too during the series against Australia in Baroda. She put up a hundred opening stand with Mandhana in an unsuccessful chase of 333, and scored 42 in that match.

“My experience (with the Indian team) has been really good. Playing in South Africa on their soil and doing well over there, that has boosted me and given me a lot of confidence. I can do much better now. It was a learning experience for me, and I understood how the team goes about, what the process is and how the South Africans play, and their stand,” she said.

Though the experienced Mithali opened the innings with Mandhana in the last two matches during the Tri-series, but on Monday Jemimah was asked to open with Mandhana. And she was ready for the challenge.

“I was prepared for any order, I was ready for even for one-down. Normally I go one-down, and I enjoy opening. It was fine,” she said.

While fielding, she took three catches and two of them came while running in the deep. “I love fielding and right from when I started (playing) cricket I enjoy fielding,” she smiled.

The talented cricketer is keen to improve further before she plays franchise cricket in Australia like Mandhana and Harmanpreet do.

“I would like to play (in the Women’s Big Bash League), but I will have to improve a lot on my fitness and batting. I have not spoken to the Australians yet, but if I get an opportunity I would love to play,” she said.

Jemimah, who made just one run in the first match and didn’t bat in second one, said she learns from every game.

“I just need to keep on learning. Even when we do well, I was thinking of which areas I can get better, because normally when we do well we forget about everything and get carried away with the victory. When we lose we realise our mistake better and we get an opportunity to learn from it,” she revealed.

‘India will bounce back’
Though India are out of final contention in the ongoing tri-series Twenty20 tournament, with three straight losses after being blanked out by Australia 3-0 in the recent ODI series in Baroda, Jemimah felt that India will bounce back well before the ICC World Twenty20. The tournament is slated to happen in West Indies this November.

“The best part of our team is that we are together, and there is no blame game going on because of these consecutive losses. Each one is taking their responsibility. We are going to bounce back and and we are going to come back in the coming series and specially in the (T20) World Cup,” she said. Indian women play next in the three-match ODI series against England in Nagpur.

Hockey takes back seat for now
Jemimah has also represented the state in the junior team and loves to play hockey too. But since making tons of runs at domestic level and getting into the India women’s cricket team she hasn’t got time to play hockey.

“Actually, I don’t get time to play hockey because our schedule is a little packed. We have camps and domestic tournaments one after the other, but I would love to go and play hockey any time,” she said.