It is understood that de Villiers had last year informed CSA about his decision of quitting test cricket but was given a time to reconsider. 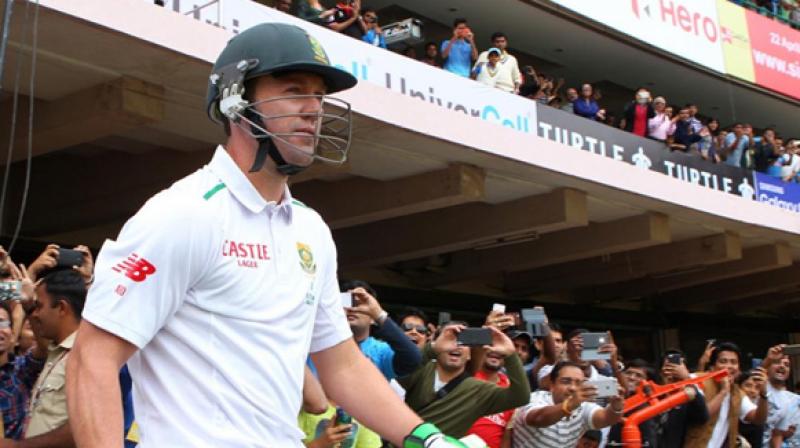 2019 World Cup in England will be the swansong for the 33-year-old South African. (Photo: BCCI)

Johannesburg: Swashbuckling South African batsman AB de Villiers is expected to retire from Test cricket as early as August when he meets the official of Cricket South Africa (CSA), unless the cricket board can convince him to stay on again.

Considered as one of the outstanding batsmen of his generation, De Villiers headed home from London after the Proteas lost the three-match T20 series against England 1-2 following their 19-run defeat in the third and final T20 in Cardiff on Sunday.

It is understood that de Villiers had last year informed CSA about his decision of quitting the longest format, but was instead given a time of a year out of the game in a bid to get him to reconsider.

However, as per ESPNcricinfo, the Proteas limited overs skipper is understood to contemplating Test retirement when he meets CSA officials following the appointment of a new coach in August, in an attempt to continue playing white-ball cricket for South Africa until the 2019 World Cup.

Before leaving the United Kingdom, the 33-year-old said he and the CSA would "make a final decision about what happens for the next few years" when they meet in a few weeks' time. He also indicated that the appointment of the new coach would be key to his future.

Current coach Russell Domingo's contract will end at the end of the current England tour and as per sources, he has not reapplied for the post despite the support of the players, including de Villiers.

De Villiers had taken a break from Test cricket after being ruled out of the tour of Australia last year with an injury. He, however, planned to return to the format in September, when Bangladesh will tour South Africa. And it is believed that since that he has wanted to retire from Test cricket.

In a column for The Independent, former South Africa skipper Graeme Smith confirmed this information when he wrote: "It's my belief that AB was looking to walk away from the Test game last year at some point, but has been encouraged to carry on by CSA."

"His personal prerogative is ensuring he does all he can to add as much longevity to his international career as possible, as well as taking in to account the harsh realities of touring such as the amount of travel involved, and the toll that takes on your body," he added.

Smith further said that de Villiers has already made huge sacrifices for the South African cricket and it is likely that with the next ICC World Cup just two years away, he is targeting that tournament as a swansong to his already illustrious career at the top level.

"What has AB de Villiers got to prove to anyone? He's a star, and those players are often expected to be available all of the time no matter what the consequences might be personally," Smith wrote.

The former left-handed batsman's advice to the 33-year-old is to "step away from the captaincy", and concentrate on maintaining his energy levels for the World Cup.

De Villiers has already reiterated his ambition to win the 2019 World Cup in England. However, adding the same is dependent on how the discussion with CSA went.

"It's my main dream to win a World Cup for South Africa, or to be part of it in one way or another. I don't even think it's in my hands, what is going to happen. I will wait until the final decision on the coach and things like that are made. Then, I can also have a chat with CSA to see where I am going to fit in," he said.