ICC CWC'19: India vs West Indies; determining the loopholes and core of the team

India will look to carry on its winning run, having defeated Australia, Pakistan, South Africa and win-less Afghanistan. 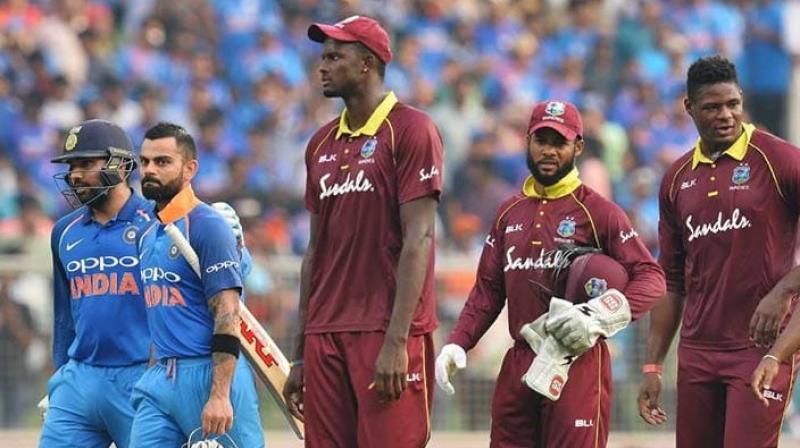 West Indies who will aim to halt India’s winning streak, has won two and lost the remaining four matches it played. (Photo:AFP)

Mumbai: Rampaging India will look to carry on its winning run, having defeated heavy weights Australia, inconsistent Pakistan, World Cup exiting South Africa and win-less Afghanistan who nearly handed India its first defeat. On the other hand, West Indies who will aim to halt India’s winning streak, has won two and lost the remaining four matches it played.

Now that Dhawan has been ruled out of the 2019 World Cup, KL Rahul will be expected to anchor the innings, with Rohit Sharma will be the aggressive opener. KL already has notched up his maiden hundred during the warm up match against Bangladesh.

During the match against Pakistan, we saw KL Rahul and Rohit Sharma cooperation and coordinating with each other. So it seems that the duo is working on improving their communication.

Mahendra Singh Dhoni also showed his prime form when he slammed a hundred along with KL Rahul to guide India to their victory during their warm up match versus the Bangladeshis.

However, during the match against Afghanistan, Dhoni played a slow knock of 28 which earned him heavy criticisms. So, his batting position remains to be a big concern.

Now, the real question remains is who will bat at number four – will it be Vijay Shankar, Dinesh Karthik or World Cup ousted player, Rishabh Pant?. If we talk about the lower order, then, Ravindra Jadeja and Hardik Pandya have been in good form as the duo formed a small partnership to take the Indian side towards a paltry score of 179 against the Kiwis.

Hardik Pandya again showed his brilliant batting skills as his quick cameo of 48 took the Indians to a huge score of 352 against the Aussies. However, during the warm up match against the Black Caps, we saw the Indians suffered a major batting collapse majorly due to the great bowling by Kiwi pacers, Trent Boult and Matt Henry.

Mohammed Shami played a crucial role in India’s 11 run victory over Afghanistan.  Shami picked three important wickets on the trot to become the second Indian after Chetan Sharma to pick up a hat-trick in the World Cup.

In the match against Pakistan, Kuldeep Yadav is expected turned out to be the game changer for India as he picked up three crucial wickets. However, in the previous games only Chahal has been able to scalp wickets during crucial times, while Kuldeep has conceded runs. After the game versus Pakistan, it has become evident that India will play Kuldeep and Chahal

India also has an extra spinner in Kedar Jadhav, who got back to form after his vital knock of 52 stretched India’s total to 224. While, in terms of bowling, Kedar was smashed all over the park in his one-over spell against Australia However, seeing the pitch, it remains to be seen if the Indian unit goes with its spin pair (Kulcha).

While the openers have been playing key roles, their untimely dismissal during the Afghanistan clash left the middle order batsmen exposed at times of low scores and great pressure. The result—sub-par performance and a total of just 224, which Gulbadin Naib and co had almost chased down.

India has been switching the batting order far too frequently in recent years. Vijay Shankar himself was the 12th batsman in just two years to take the fourth spot in the order. Infact, it was Shankar’s first time batting at number four in any form of cricket. Batting is different at various orders.

Batting needs balance as well as adaptability to the match’s pace. Openers go on the pitch with a different mentality, compared to the batsmen going in at number 3 and 4, and that holds true for the last few batsmen as well. Unlike the consistency of the openers, the middle order being changed too frequently too soon doesn’t let the players settle into the role.

West Indies started off their World Cup campaign with a bang. In the first match, the Caribbean crushed Pakistan by seven wickets to earn their first points.  However, in the second game versus Australia, the unit couldn’t hold their nerves as, the Jason holder-led team lost the match by 15 runs.

Following that match, the Bangladesh team stunned the Caribbean nation to keep semis hopes alive. Jason holder’s team again slumped to another defeat as it lost to New Zealand by five runs. However, if was not for the heroics of Carlos Braithwaite, the team would have collapsed a long time ago.

Coming to the team’s batting issues, the team’s batsmen are in good touch, with players like Chris Gayle, Shimron Hetmyer, Nicholas Pooran, Shai Hope and Carlos Braithwaite all of them have scored either scored 50s or 100s.

However, the real problem is their temperament – none of the batsmen have actually thought of playing the game with maturity. This symptom shows that the WIndies batsmen are best suited to play T-20 than the 50-overs format.

When it comes WIndies bowling, West Indies will be relying on their pacer Sheldon Coltrell to deliver early wickets. Cottrell is known for his special style celebration - March and stop with a salute. Coltrell can be the X-factor for West Indies.

Cottrell got the crucial wicket of Imam-ul-Haq. He continued his form against Australia when he scalped two crucial wickets of David Warner and Glenn Maxwell. In the last match, Cottrell ran through the top-order of New Zealand as he fetched four wickets.

However, it would require extra special effort to knock off batsmen whose minds are as strong as steel. The bowlers have to work a little hard to scalp the wicket of Virat Kohli. In the match against Australia and New Zealand, the bowlers struggled to scalp the all important of wicket of Steve Smith and Kane Williamson.