MS Dhoni a mastero with no hang-ups

Most impressive, of course, was Bhuvaneshwar’s half-century. He showed steel of nerves and not a little skill with the bat. 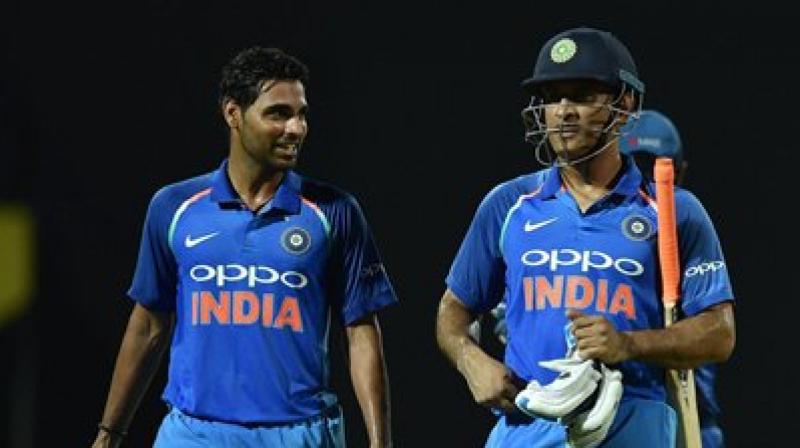 India’s fantastic win last week in the second ODI has been the highlight of an otherwise puerile tour of Sri Lanka. Almost every match yet had been so one-sided as to be predictable, even boring. To see a keenly contested match then was a dramatic and welcome departure.

Chief coach Ravi Shastri in a tweet likened India’s win to a `jail break’. If somewhat euphemistic, this nonetheless captured best the stunning turnaround in the match by Mahendra Singh Dhoni and Bhuvaneshwar Kumar after eight wickets had fallen for not too many.

From a near impossible situation, these two put on a sterling century partnership that took India to victory. But for the fact that Sri Lanka have played so poorly in the past few weeks, this would go down as among the more sensational ODI results in recent times.

Most impressive, of course, was Bhuvaneshwar’s half-century. He showed steel of nerves and not a little skill with the bat. For a number 9, he could hardly have been faulted had he not measured up. That he did highlights just how deep India bat currently.

But in the context of that match — and India’s gameplan going ahead for the 2019 World Cup — Dhoni’s was perhaps the more significant contribution. He read the situation perfectly, dropped anchor, eschewed aggression, and allowed Bhuvaneshwar to take over as main run getter.

Of course, these are hardly new qualities in Dhoni. But the importance of such an approach increases when seen in the present context. Playing second fiddle to a junior, more so when you are under attack from critics is not easy.

To play the way he did demands clarity of thought, fortitude apart from fine understanding of match situations. Most pertinently, it shows strength of character, demanding sublimation of ego. This was a maestro with no hang-ups.

I am almost stretching this piece into an advocacy for Dhoni because I sense growing impatience about his value to the team. This largely stems from his past record, and more particularly his batting. In my reckoning, this assessment could be flawed.

Dhoni may not make as many runs as he used to, and occasionally not as swiftly as he used to, but his relevance as the 2019 World Cup approaches does not lessen. The history of World Cup cricket throws up interesting examples of players who, in the sunset of their careers, were of critical importance to their teams’s fortunes.

For instance, in the inaugural World Cup final in 1975, while everybody remembers Clive Lloyd’s blistering 102 it is unlikely the West Indies would have won without 38-year-old Rohan Kanhai’s half century and crucial partnership with his captain after a top order collapse.

Subsequent tournaments too highlight how richness of experience can make a huge difference. In the 1983 World Cup, while Kapil Dev’s 175 against Zimbabwe was the turning point for India, this would have been impossible without 35-year-old Syed Kirmani’s 26 out of a 126-runs partnership.

In 1991-92, Pakistan owed their success as much to 39-year-old Imran Khan and 35-year-old Javed Miandad as exciting young talent like Wasim Akram and Inzamam-ul-Haq. In 1996, arguably the biggest contributor in Sri Lanka’s triumph was their oldest hand Arjuna Ranatunga.

I can stretch this further to the influential roles played by Steve Waugh in 1999, Adam Gilchrist in 2007 and Sachin Tendulkar in 2011 (all in their mid or late 30s) in the victories registered by their respective teams.

But that is laboring the point. Experience and maturity are not easily substituted and India must not ignore this aspect as they narrow down on choices for the 2019 World Cup.

This does not mean automatic entry for Dhoni. There can’t be free passage for anybody.

The onus is still on Dhoni to maintain his fitness and form. Meanwhile, his selection must be assessed in the context of a tweaked job profile, not the old yardstick.