India were in a precarious situation after India lost four quick wickets in the span of ten-overs. India slumped to 54/4 within 10-overs. 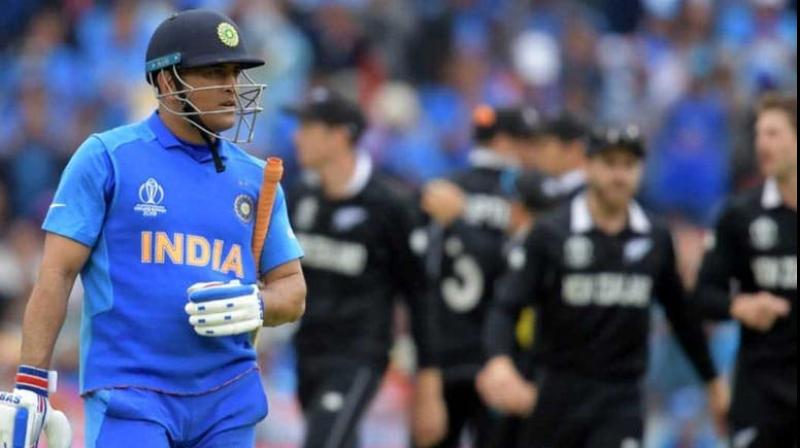 After India lost to New Zealand in the 2019 World Cup semi-final, many cricket legends including Sourav Ganguly and VVS Laxman slammed the team management and the selectors’ decision to send Mahendra Singh Dhoni at number 7. Now, recently, Indian cricketer Suresh Raina has also opined that MS Dhoni could have won the match for India, if he had been sent at no 4. (Photo:AFP)

Mumbai: After India lost to New Zealand in the 2019 World Cup semi-final, many cricket legends including Sourav Ganguly and VVS Laxman slammed the team management’s decision to send Mahendra Singh Dhoni at number 7. India, who lost to the Kiwis by a margin of 18-runs, were in a precarious situation after India lost four quick wickets in the span of ten-overs.

Despite losing those early wickets, the team management decided to send MS Dhoni at no 7, and that proved to be costly as after Dhoni got run out in the 49th over by Martin Guptill, whose direct throw hit the bull’s eyes (stumps). Following Dhoni’s dismissal, India’s bid for a third World Cup trophy was crushed.

In an interview with the Hindu, the southpaw stated, "Had he (Dhoni) come earlier, he could have guided Pant and then we still had Pandya and Jadeja. Even then he kept India in the fight till the very end and we would have won but for the direct hit from Guptill."

Following India’s semi-final exit from World Cup 2019, MS Dhoni took a sabbatical to train with paramilitary forces in Kashmir. However, after the global show-piece, many reports came out stating that the 38-year-old veteran would retire soon.

Speaking on Dhoni’ career, Raina feels that is up to Dhoni to declare his retirement. "Only Dhoni will decide when he leaves the game," Raina said.

India’s no 4 position became a highly debated topic, especially after the selectors and team management tried 15-16 players at no 4, but no one seemed to have cemented his place. However, the 32-year-old believes India’s solution to no 4 as two successive T20 World Cups (2020 and 2021) are lined up.

"I can be the No. 4 for India. I have batted in that slot before and delivered. I am looking forward to an opportunity with two T20 World Cups coming up."