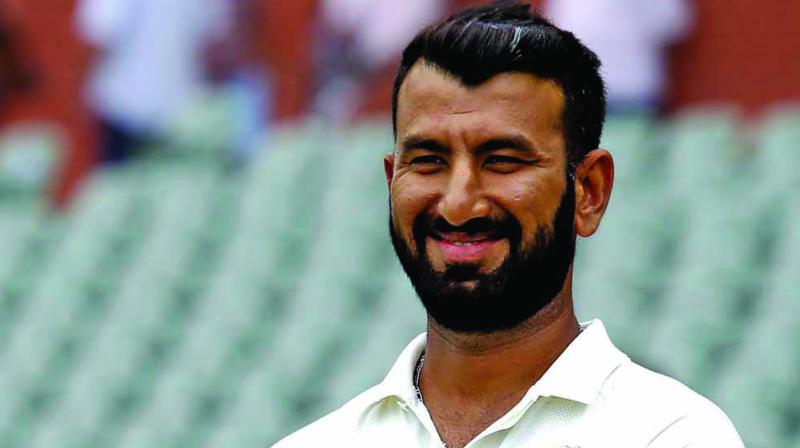 Bengaluru: A sensational partnership between Cheteshwar Pujara and Sheldon Jackson has put Saurashtra on course for an emphatic win over Karnataka in the semifinal of the Ranji Trophy.

Saurashtra need only 55 runs with seven wickets in hand when the action resumes on day five at the M. Chinnaswamy Stadium. Pujara (108 not out) and Sheldon (90 not out) took the game away from Karnataka with their unbroken double century (201) stand for the fourth wicket.

At 23/3 and having lost two batsmen — Snell Patel and Vishvarajsinh Jadeja - for ducks off Vinay Kumar deliveries, Saurashtra’s tricky chase of 279 was in a shambles. KV Siddharth took a splendid catch to dismiss opener Harvik Desai (9), who had scored a brilliant hundred in Saurashtra’s record chase in the quarterfinal against Uttar Pradesh.

Pujara who had benefited from an umpiring howler in the first innings cashed in on another wrong decision to complete his 49th first-class hundred. Television replays showed that Pujara, who was on 34, had clearly edged the ball to the wicket-keeper but the umpire turned down the appeal much to the disappointment of the local crowd. Pacer Vinay Kumar’s frustration said it all.

The hosts hoped for a better display from spinners, but Krishnappa Gowtham who rolled his arm for 14 overs was disappointing. Leg-spinner Shreyas Gopal who suffered an injury while fielding could only manage six overs.