Ravichandran Ashwin had finished 2015 as the number-one ranked Test bowler in the world, a position he twice reclaimed in 2016. 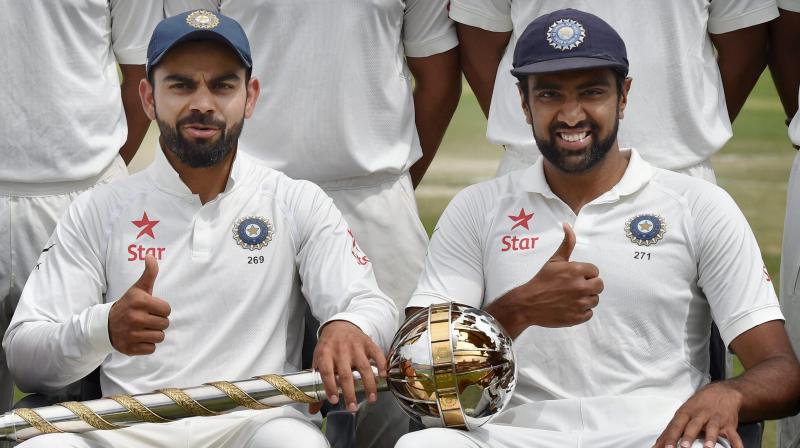 : The Indian cricket team on Tuesday retained the ICC Test Championship mace after clinching a four-match series against 2-1 in Dharamsala.

has also won a cash award of one million dollars for ensuring top position in the ICC Test Team rankings on the annual April 1 cut-off date.

Captain Virat Kohli received the mace and cheque from ICC Cricket Hall of Famer Sunil Gavaskar at a ceremony after the fourth and final Test against in Dharamsala, in which Ajinkya Rahane led the side as Kohli could not play due to a shoulder injury.

had entered the series against needing to win at least one Test to retain possession of the prestigious mace, which it had reclaimed following the Indore Test against in October 2016.

The second and third places in the rankings will be decided after the ongoing Hamilton Test between and . If wins or draws the Test, it will be assured of second place but a loss will see finish ahead of it in second place.

"We are absolutely delighted to have topped the ICC Test rankings. The longest format of the game really tests a team's character and I'm proud that we have proved ourselves to be the best," Kohli said after his side's clinched an eight-wicket win over Aussies in Dharamsala.

"Being presented with the Test championship mace last year was an exhilarating experience and the feeling is no different this time. I'd like to both congratulate and thank everyone who has been part of this success. This includes not only all the players who have been in the squad but also the team management and support staff, without whom we could not have done so well. It has not been an easy journey but all the hard work has been worth it," Kohli said.

"We have maintained our position with some really good cricket in recent months. The team has shown the tenacity to bounce back from difficult situations," he added

Sunil Gavaskar, on the other hand, said, "Congratulations to the Indian team for its superb performances in Test cricket. Being at the top in this format is no mean achievement and proves that the players have been doing well on a consistent basis."

"The horizon has changed with the development of the limited overs formats but Test cricket has held on to its own even 140 years after it was first played. Everyone recognizes that Tests are the ultimate trial of a cricketer's caliber. It's good to see the players enjoy the challenges that Test cricket presents and have high regard for others who do well in the format."

ICC Chief Executive David Richardson, "On behalf of the ICC, I would like to congratulate India for achieving and maintaining number-one status amid some stiff competition, particularly from Australia and Pakistan who both held the top spot over the last year, and South Africa who have had some great Test series wins of late. The team has shown great consistency over the last 12 months, it possesses a variety of talent and is an exciting team to watch."

"I'm sure being recognized as the best Test nation is something that the team will really be proud of and I look forward to another year of outstanding Test cricket being played as they look to defend their position."

After receiving the award the award from former captain and ICC Cricket Hall of Famers Kapil Dev and Sunil Gavaskar respectively, Ashwin said,"It has been a great honour to be named by the ICC for two top awards and it is dreamlike to actually receive them here."

"What has been greatly satisfying for me is that I have helped the team do well during this period. We have a great unit that has done well across formats. Being on top of the Test table, in particular, is an accomplishment we are all proud of," he added.

Ashwin had finished 2015 as the number-one ranked Test bowler in the world, a position he twice reclaimed in 2016.

"I'd like to thank all my team-members, team management and support staff for helping me perform. I hope to continue doing well and help my team win many matches in the coming years," Ashwin said.

"I thank my family and also would like to remember my uncle who passed away suddenly during this game. My uncle's family has also been a pillar of support all these years," he added.

"I thank the ICC for recognizing and encouraging players with these awards because such moments always remain in one's memory."

Former cricketer Kapil Dev, who presented the Sir Garfield Sobers Trophy for ICC Cricketer of the Year to Ashwin, said, "Congratulations to Ashwin for winning this ICC award. Ashwin has shown his penchant for winning Test matches time and again. He has played a big part in becoming the top-ranked Test side. Not for nothing has he himself been ranked the number-one bowler on the ICC Test rankings for so many weeks."

"Ashwin is a big asset for the team as he is useful with the bat and is a thinking all-rounder. I'm sure he will have a lot many successes in the coming years and help win many more matches, both at home and abroad," Dev added

Gavaskar,on the other hand, said, " has always produced some of the finest spin bowlers seen in the game. Ravichandran Ashwin and Ravindra Jadeja are the latest who are upholding that wonderful tradition. It is never easy for a spinner to make the adjustments required for the different formats of the game. Ashwin in particular has made these changes seemingly without any effort and continues to pick wickets in all formats of the game."

"Besides he is a batsman who prizes his wicket dearly and makes useful contributions with the bat. The number of man of the match awards and man of the series awards he has won show why he is the biggest match winner for in recent times. He thoroughly deserves all the accolades coming his way including the latest, the coveted Garfield Sobers Trophy. Well done and hearty congratulations to Ashwin."

ICC Chief Executive David Richardson said, "Ashwin has shown time and again that he is a match-winner in the true sense. I congratulate him for joining a select band of cricketers to have won these two top ICC awards."