India beat Australia by 8 wickets in Dharamsala Test to end a fabulous home season on a high. 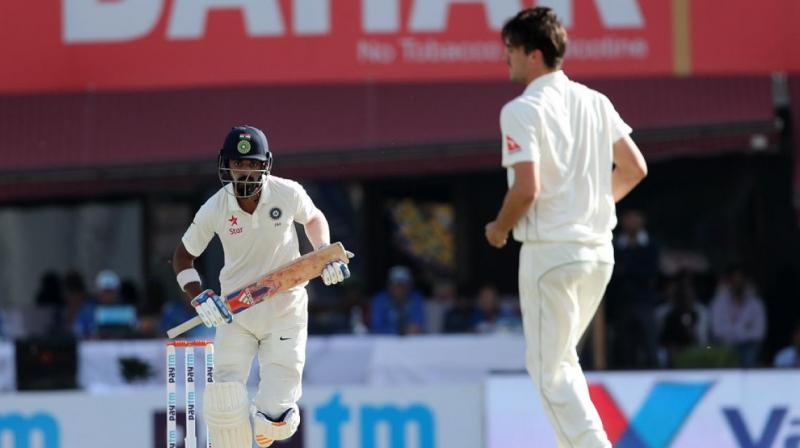 KL Rahul scored his sixth fifty in the series to guide India to series win against Australia. (Photo: BCCI)

Dharamsala: India defeated Australia byeight wickets in the fourth and final cricket Test to claim the four-match series 2-1 at the HPCA stadium, here on Tuesday.

Chasing 106 for a win, India finished at 107 for two, losing the wickets of Murali Vijay and Cheteshwar Pujara. Opener KL Rahul (52 not out) and stand-in skipper Ajinkya Rahane (38 not out) remained unbeaten to take India home.

Australia’s task, as the day began, was cut out as they needed a miracle to win the Dharamsala Test as India required 87 runs more with 10 wickets remaining to clinch the four-match series.

After bundling out Australia for 137 in the second innings, India were 19/0 at stumps Day Three of the final Test at the Himachal Pradesh Cricket Association Stadium (HPCA).

Resuming at yesterday's score of 248-6, Wriddhiman Saha (31) and Ravindra Jadeja (63) kept the scoreboard ticking as the duo shared a crucial 96-run stand for seventh wicket to guide India to a total of 332 runs and first-innings lead of 32 runs.

Later, an exemplary bowling performance by India saw Australia bowl out in their second innings for 137, leaving the home side a modest target of 106 to win the match and the series.

Glenn Maxwell (45) was the highest scorer for the visiting side.

While Jadeja, Umesh Yadav and Ravichandran Ashwin bagged three wickets each, Bhuvneshwar Kumar also chipped in with a wicket.

At stumps, openers KL Rahul and Murali Vijay were batting at the crease on their respective scores of 13 and 6.