Sports   Cricket  28 Apr 2020  Tendulkar confirms speaking to Prithvi Shaw about 'life on and off the pitch'
Sports, Cricket

'When it concerns a youngster, there should be an element of confidentiality attached to it, at least from my side' 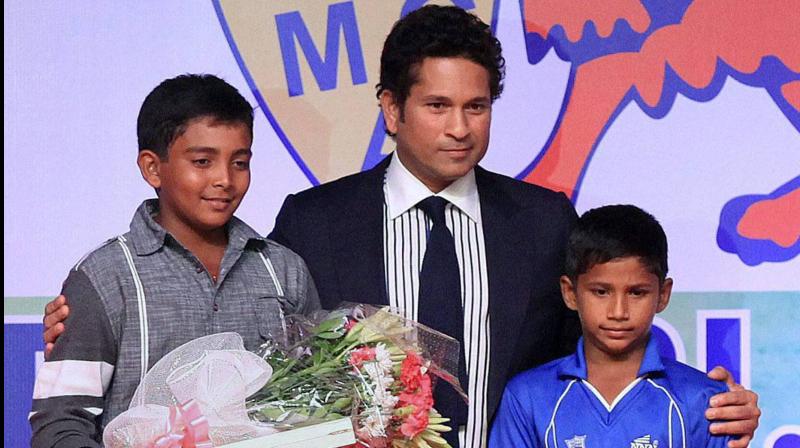 New Delhi: He has been a model sportsman all his life and it was hardly a surprise when Sachin Tendulkar became a guide to the young Prithvi Shaw, helping him deal with life on 22 yards and off it during a rough patch.

The 20-year old Shaw had a sensational Test debut as the second youngest Test centurion from India before an ankle injury and a failed dope test kept him out for 16 months.

Some disciplinary issues have also been talked about quite often in Indian cricket circles for some time now.

It was at this point that Tendulkar came into the picture and mentored Shaw as he negotiated a very precarious phase of life during which nascent careers can go southbound.

"Yes, it's true. I have had a number of interactions over the years with Prithvi. He is a very talented player and I am happy to help him. I spoke to him about cricket and also about life beyond cricket field," Tendulkar told PTI during an interaction.

However, Tendulkar was not comfortable when asked what exactly was discussed during his multiple sessions with Shaw.

"I believe if a youngster has approached me and sought guidance, there should be an element of confidentiality attached to it, at least from my side. So, I would not like to tell you what the discussions were," the iconic batsman said.

But Shaw, of late, has been very vocal about the guidance he got from the senior Mumbikar.

"That's fine. If Prithvi wants to speak about it, it's his choice."

Tendulkar said that he has always been open to guiding youngsters who would seek him out individually.

And there are a number of others, with whom he speaks on a one-on-one basis apart from Shaw.

"I have spoken and guided a lot of youngsters at an individual level. I have maintained that if anyone feels that I can be of any help in guiding them about their game, I am always open to the idea," the maestro said.

Not only Shaw, even India captain Virat Kohli sought Tendulkar's suggestions as recently as the Pink Ball Test against Bangladesh in November last year.

"I spoke to Sachin paaji on the evening of the first day and he made a very interesting point. Probably with the pink ball, you have to treat the second session like the morning session when it's getting darker and the ball starts to swing and seam.

"So first session you invariably play like you play from lunch to tea in a normal timing Test match, then the second session would be like a morning session and the last session is like that evening session," Kohli, who became India's first pink ball centurion, told mediapersons.