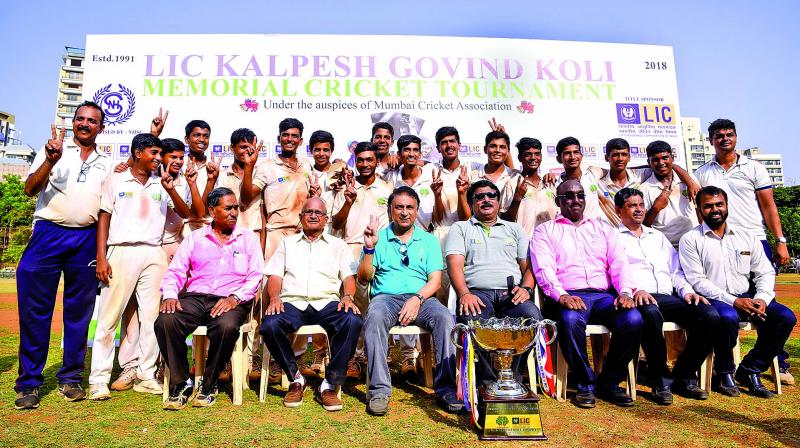 Gavaskar reiterated the importance of club cricket in Mumbai and called it the life and soul of cricket.

There were many nostalgic moments for former India skipper Sunil Gavaskar as he attended two functions simultaneously at the Major Ramesh Dadkar Maidan, popularly known as the Matunga Gymkhana ground on Saturday.

The original Little Master came to ground after landing at Mumbai airport from Kolkata, where he was commentating on the Indian Premier League Qualifier 2 on Friday night between Kolkata Knight Riders and Sunrisers Hyderabad.

He first inaugurated the the Hemant Waingankar Abhyaasikaa study room at Dadar Parsee Zoroastrian Cricket Club (DPZCC) and later was the chief guest at the adjacent New Hind Sporting Club. Next to New Hind ground is the famous Dadar Union ground where Gavaskar grew up playing. He met many friends of his youth, and despite perspiring profusely, the 68-year-old shared words of wisdom with young cricketers and also recollected his hey days.

"Play cricket as a game and with joy. You will make friends in your team as well as the opponents, for lifetime. Do the same while studying,’’ Gavaskar said to kids who were still in their single digits in terms of age before inaugurating study room at  DPZCC.

DPZCC host, Mangesh Bhalekar, recipient of the state and national award, said the students (mostly under privileged from municipal schools) are given free coaching and allowed to study even at night.

“Even I started in the same way. After school, I played for the club (Dadar Union), then when I made runs in the club, I got a chance to go ahead, as the selection committee understood that he made runs,” Gavaskar, who was first Test cricketer to reach 10,000 runs and once held the record of 34 centuries, said.

The veteran of 125 Tests advised young cricketers to play the game in a fair manner. “This game of cricket also teaches us that we need to win in a fair manner. There is no benefit in cheating as you will be caught sometime. Take pleasure in cricket and that happiness will help you improve your game.”

Later at the 28th LIC Kalpesh Govind Koli Memorial Cricket Tournament Final award ceremony, Gavaskar was pleased with his introduction which showed video footage of his debut series during the famous West Indies tour of 1971, in which he accumulated 774 runs and India won the Test series (1-0), installing self belief in the side.

He narrated anecdotes when West Indies great Garry Sobers saw him as a lucky mascot and went on to score centuries. So skipper Ajit Wadekar locked him inside the toilet once so that Sobers wasn’t able to touch him in the dressing room, and it worked for India as Sobers was out on the first ball. He was also at his witty best complaining that organisers invited his son Rohan Gavaskar as chief guest much before him and in a lighter vein hoped Rohan’s son will be chief guest at the 50th anniversary of the tournament.