In 2018, Warner and Smith were banned for their involvement in the ball-tampering scandal. 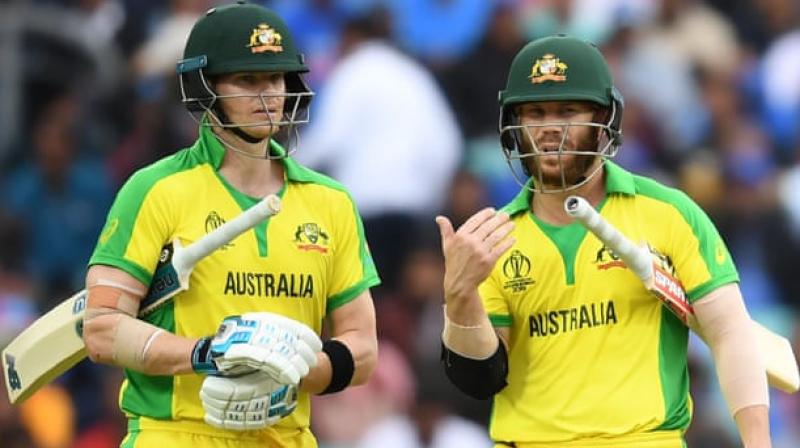 Apart from David Warner and Steve Smith, it was Cameron Bancroft who was banned but he was handed a nine-month ban as opposed to one-year ban for Warner and Smith. (Photo:AFP)

Melbourne: Former Australia captain Ricky Ponting said he was pleased to see both David Warner and Steve Smith perform in the World Cup despite being jeered by the English crowd.

"I'm sure it's been difficult, but you wouldn't know from the way they've been around the team. The important thing for those guys coming back into the side was, if they started the World Cup well and got some runs under their belts, then it would be easier for them to handle some of the stuff that's been going on. I'm just pleased for both of them that they played the way they did," Cricket.com.au quoted Ponting as saying.

In 2018, Warner and Smith were banned for their involvement in the ball-tampering scandal. However, even after serving their ban, English fans were hostile against both in the recently concluded World Cup.

The trio - Warner, Smith and Bancroft - have been included in Australia's 17-man squad for the upcoming Ashes. Smith and Warner managed to face the English crow during the premier tournament. Moreover, Warner was the second-highest run-getter of the tournament with 647 runs, only one run behind the topper India's Rohit Sharma.

However, now it is time for Bancroft to face the same but Ponting is certain that the 26-year-old will handle it.

"I think Justin Langer is a pretty good assessor of people's character. And Justin talks very highly of Cameron Bancroft as a person and as a character, so if that's the case I think he will handle it fine," he said.

Australia will face England for the first Test match in the Ashes on August 1.