The fifth ODI will be played on Sunday. 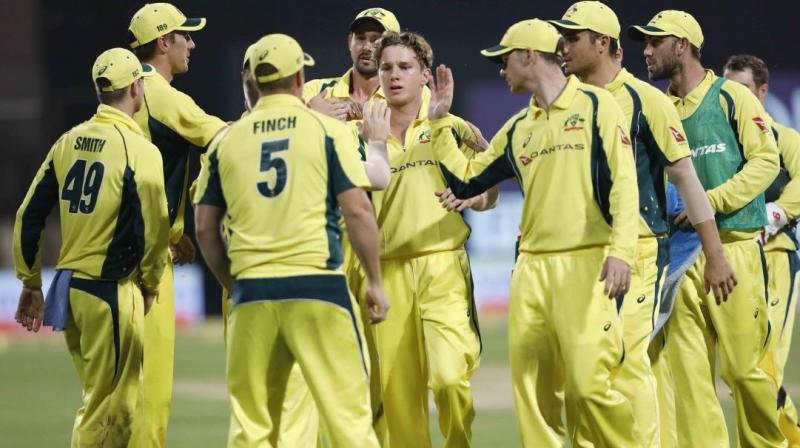 Bengaluru: Steve Smith’s Australia completed a 21- run win over Virat Kohli’s Team India. After electing to bat, Australia got off to the best possible start in the series, having finished at 334-5 from 50 overs.

The main highlight of the Aussie innings was the 231-run first-wicket partnership between David Warner and Aaron Finch, who scored 124 and 94 respectively. For India, Umesh Yadav was the main star with the ball, picking up four of the five wickets, whereas Kedar Jadhav picked up the other lone wicket.

During India’s reply, openers Rohit Sharma and Ajinkya Rahane got off to a promising start, building a 106-run partnership before Rahane collapsed at 53. Rohit Sharma was the next to depart, after scoring 65. Despite Virat Kohli failing to play a good innings, a well-played knock of 67 by Kedar Jadhav gave the hosts some hope of winning the match.

However, that was not enough as MS Dhoni (13) also failed to produce runs, and take India home. In the end, it was a memorable night for Aussies, who finally secured a win after a long losing streak.

WICKET! Kedar Jadhav departs after a well-played innings of 67 in this crucial run-chase.

FIFTY! Kedar Jadhav has reached his third ODI fifty. However, rain has stopped play immediately after this. Not so good news for cricket fans, especially with less than 10 overs to go.

WICKET! Hardik Pandya has departed after a well played cameo, as Adam Zampa gets a wicket. Will the Aussie bowlers take the team home from here?

After losing two consecutive wickets in Rohit Sharma and Virat Kohli, Hardik Pandya and Kedhar Jadhav have powered towards 200,with less than 20 overs to go to chase the 300+ total. Will the duo carry on from here?

WICKET! This is a huge wicket for as Virat Kohli has departed. Nathan Coulter-Nile bowls out Kohli, as have lost a crucial wicket.

WICKET! Rohit Sharma is run-out as lose their second wicket.

WICKET! Kane Richardson finally gets the breakthrough for as he sees off Rahane, thanks to a brilliant catch by Aaron Finch at long-on.

FIFTY! Both Ajinkya Rahane and Rohit Sharma have reached their fifties quite comfortably, taking past 100. The batsmen are not giving any room for to breakthrough, who have not had a memorable series so far.

Rahane and Rohit have taken past their fifty-run mark, needing just less than 300 runs. Clearly, this has been an entertaining start by the openers, with boundaries and sixes all over the place.

Rahane and Rohit have got the Men in Blue to a strong start here, with both of them contributing equal runs through boundaries.

A well-played century by opener David Warner (124) and Aaron Finch’s 94 on Thursday powered visitors Australia to a mammoth total of 334-5 from 50 overs in the fourth ODI against Virat Kohli’s Team India at the M Chinaswamy stadium here.

Warner and Finch got the Aussies off to a strong start, having put up a 231-run partnership for the first wicket. Centurion Warner, however, was the first one to depart as Kedar Jadhav got his wicket, thanks to a good catch by Axar Patel at long on. Aaron Finch (94), who missed out on his ninth ODI century, was the next to depart, as pacer Umesh Yadav got his 100th ODI wicket.

Peter Handscomb, too, contributed 43 runs before he was struck by Umesh Yadav. However, captain Steve Smith could not continue his consistent run as he was dismissed for just three runs, thanks to a spectacular catch by Virat Kohli off Umesh Yadav's bowling.

In the Indian bowling department, Umesh Yadav was the pick of the bowlers after having picked up four crucial wickets. Apart from Yada, Kedar Jadhav was the lone wicket-taker for the Men in Blue.

Virat Kohli and co will hope to chase down the challenging total of 335 in order to extend their unbeaten run, and extend the series lead as well.

WICKET! 4th wicket for Umesh Yadav as he ends Peter Handscomb's vigil The Australian scored 43 off 30 balls to deny India a chance to run through the Australian lower middle-order and help Australia to go past 320-run mark.

WICKET! Umesh Yadav has removed Travis Head. Ajinkya Rahane takes a neat catch near the boundary rope to help Umesh get his 3rd wicket of the match. Australia are moving closer to 300.

Peter Handscomb and Travis Head have made sure that Australia don't lose wickets but the two have not really got things going as India have tightened the screws. Can Australia go past 320-run mark?

WICKET! What a comeback this is from India! Steve Smith departs cheaply. The Australian tumble has begun. Umesh Yadav has struck again as Virat Kohli catches one at the short mid-wicket. From 231/0 to 236/3.

WICKET! Oh dear! Australia have lost Aaron Finch now. 2 wickets in space of 6 balls. Finch tries to clear the mid-on, does not connect it well and Hardik Pandya is safe as houses as he takes an easy catch. Finch has failed to score 2 hundreds in a row.

WICKET! Finally, a breakthrough! It's that man Kedar Jadhav again. David Warner tries to smack one through the leg-side in search of quick runs. He mistimes it and Axar Patel holds onto an easy catch in the deep. A much-needed wicket for India.

HUNDRED! David Warner has done it. 100 in his 100th ODI. He looked set from the first ball today and on such a lovely batting track, he has not thrown it away. A very special as he and Finch move closer to 200-run opening stand.

MISSED STUMPING! Well, that's unusual from MS Dhoni!  Finch dances down the track off Chahal's bowling. Fails to connect. The ball rushes through the gap of bat and pad. It seems Dhoni could not sight the ball. Warner, meanwhile, is looking in good shape to score a ton in his 100th ODI.

HUNDRED! Australia have made a solid start as David Warner and Aaron Finch have denied India an early wicket. The two have cashed in on every chance to score runs. Warner has crossed 50-run mark in his 100th ODI and Finch seems to have taken off from where he had left in Indore. 5th 100-run stand between Warner and Finch.

Openers David Warner and Aaron Finch have go the visitors to a promising start, and have ensured that no wickets have been lost in the first five overs.

Australian skipper Steve Smith has won the toss as Australia chose to bat in the fourth ODI against Virat Kohli-led India here at the M Chinnaswamy Stadium on Thursday.

Looking at the pitch, both the batsmen made it clear that they would have loved to bat first.

"We are going to have a bat. The wicket has changed since they have done a bit to the ground. It will slow up as the game goes on and hopefully we can make the most of it and get a good score on the board. It has been a bit disappointing so far and we have to get back to our winning ways," Smith said.

"We would have batted first as well. However, I have played a lot here and the wicket tends to settle down under lights. I am sure the spinners will come into play in the first half," said Kohli.

Australia have made two changes to their playing XI as Matthew Wade and Adam Zampa replace Glenn Maxwell and Ashton Agar in the team.

With the series already lost, the visitors have an uphill task at hand as they look to avoid a 4-0 scoreline against the hosts.

Australia, who have been no match to India’s supremacy in the first three ODIs of the series, are playing for their pride while the hosts are eager to take a big step to move closer to their second successive ODI series clean-sweep. India will also be targeting their record 10th ODI win on a trot at Kohli’s Indian Premier League side Royal Challengers Bangalore’s homeground.

With such a rampant form like this, the Men in Blue have established fear in the minds of the opposition. Steve Smith's side, on the other hand, are currently at the receiving end of the Team India’s utter domination.

If Australia want to make an impact, skipper Smith and opener David Warner, who will be playing his 100th ODI today, will have to fire in the remaining games. Leg-spinner Adam Zampa, who was dropped in the Indore ODI, is likely to replace Ashton Agar, who will be sitting out having broken his finger. Part-time wicketkeeper Peter Handscomb, who failed to deliver in Indore, may get another chance to prove he can replace Matthew Wade.

For Team India everything seems to have fallen in place. Kohli and former India captain Mahendra Singh Dhoni have put up consistent performances, Hardik Pandya’s all-rounder performance has added a new dimension to the team. While batting has clicked in the first three ODI’s, India’s bowling has been impressive as well.

Yuzvendra Chahal and Kuldeep Yadav have troubled Australia’s batting lineup as they spun their web around batsman who have failed to counter them. Apart from spinners, pacers Jasprit Bumrah and Bhuvneshwar Kumar have also bowled well and chipped in with important wickets.

With weather conditions set to play spoilsport, fans will be praying that rain stays away from the match.