His team sweeps all six posts on HCA’s Apex Council. 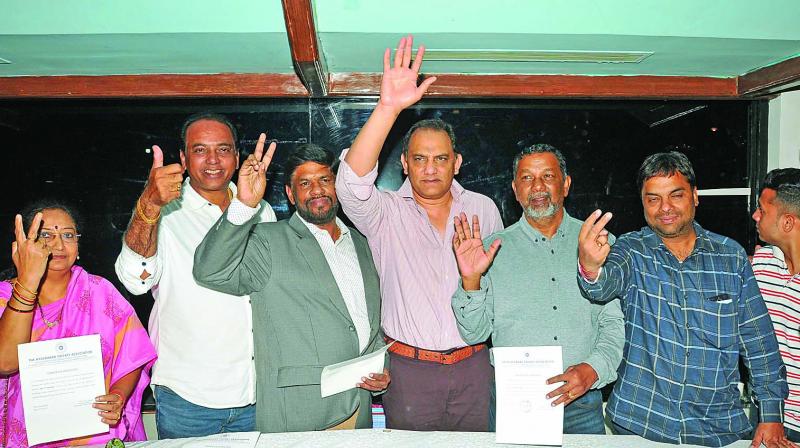 Hyderabad: Last January, Mohammad Azharuddin was stopped at the gates of Rajiv Gandhi International Cricket Stadium, headquarters of the Hyderabad Cricket Association, and not allowed to attend the Special General Meeting by the then president. On Friday, he gatecrashed the HCA edifice to become its president.

Not just that, Azhar led his team to a landslide victory to sweep all the six seats on offer in the Apex Council, including the first woman office-bearer in the HCA — P. Anuradha, who won as Councillor. The former Indian skipper came up with a captain’s knock indeed, he got the highest number of votes (from the 223 polled) among contestants across all posts — 147.

After the thumping win, Azhar did not want to reflect on the bad times and said he is eager for a fresh start. “There are only three things on my mind right now — cricket, cricket, cricket,” he told this newspaper.

The journey to the HCA hot seat has been a hard grind though. An year before being kept out of the SGM (ironically called to pass the Lodha Committee recommendations) on grounds that he was a proxy of the National Cricket Club that he sought to represent, Azhar was, in January 2017, disqualified from contesting for president after his nomination papers were not accepted by election officers as they were uncertain whether the life ban imposed on him by the BCCI for match-fixing, stood. HCA’s ad-hoc committee chairman Prakash Chand Jain had sought clarification regarding Azhar’s eligibility but nothing concrete had come from the national Board.

Life has surely come a full circle for Azhar. Among those who exercised their franchise on Sunday was Denzil Balm, coach of his school team (All Saints) back in the 1970s. There can’t be any doubt who the sagacious senior voted for. Nizam College, for which team Azhar played in the ‘A’ Division league and from where he graduated, was also among the voters.

The cricketer is looking at the grassroots again. “We will have to restructure everything and turn things around. Look at the state of Gymkhana ground, it’s left for the cows to graze. We need to get to the grassroots and unearth talent now,” Azhar said.

“The members have done their job, mine starts now. I know it won’t be easy but I will give my best to revive the game which has suffered a lot in the last three years. We will seek support from all the club secretaries and take the game forward. Their suggestions as well as those of cricket enthusiasts will be more than welcome,” Azhar, who has played 99 Tests and 334 ODIs, added.

Was getting into administration as nervous as his Test debut back in 1984? “Just a bit,” he smiles. “Back then I had worked very hard for close to 15 years to get into the Indian team and was very nervous when I played my first Test,” said Azhar who hit three centuries in his first three matches, a record still unbeaten and one that got him awards — the Arjuna in 1986 and Padma Shri in 1988.

“Here, we worked as a team and campaigned hard and knew the result straightaway. There are tense moments in any election as I know anything can happen — having contested two General Elections — but I was confident I would win this one. It’s a big victory though,” said Azhar, who was elected to the Parliament in 2009 from Moradabad in Uttar Pradesh on a Congress ticket.

Now, “I am really looking forward to BCCI meetings because I have so much to offer, having played the game for quite a while. I have represented the BCCI on teams but now to deal with the Board as an administrator will be different — this should be much easier than playing,” he laughs.

Azhar led India in 47 Tests and 174 ODIs during the 1990s. His career ended when the BCCI banned him for life in 2000 for match-fixing. In 2012, the Andhra Pradesh High Court declared the life ban illegal.