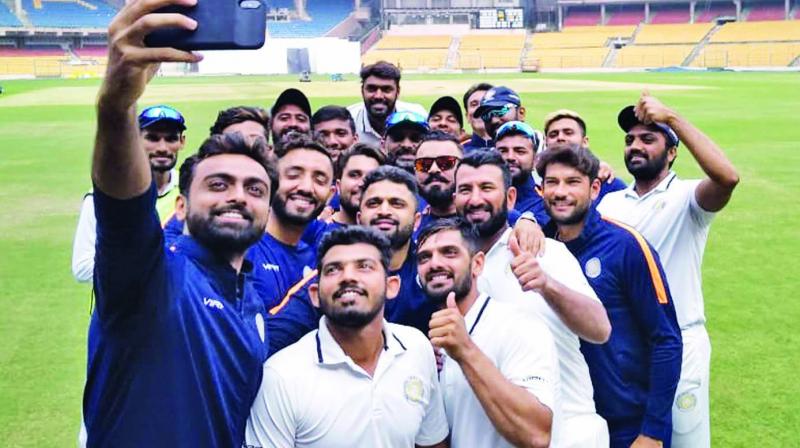 BENGALURU: Saurashtra stormed into the Ranji Trophy final after getting the better of Karnataka in the semifinal mired in umpiring controversy, here at the M. Chinnaswamy Stadium. In the summit clash to be held at Nagpur from February 3, Saurashtra will take on defending champions Vidarbha.

The visitors needed just 55 runs on day five and they achieved the target within the first session to make it to their third final in the country’s premier domestic tournament. Cheteshwar Pujara remained unbeaten (131), while Sheldon Jackson fell soon after completing his hundred.

Sheldon’s 217-ball knock included 14 boundaries. His partnership of 214 runs with Pujara tilted the game in Saurashtra’s favour after they were reeling at 23/3.

With six overs to go for the second new ball, Vinay Kumar and Abhimanyu Mithun started their spells hoping for some early wickets. Arpit Vasavada, who had scored a vital 30 in the first innings, faced the new ball well and was looking settled until he fended a short ball from Ronit More straight to KV Siddharth at short leg when only five runs required to win.  Prerak Mankad scored the winning runs.

Pujara, who won the man-of-the-match, said the partnership he stitched with Sheldon Jackson was crucial. “I think we believed in ourselves. We were three down for 23 and under a lot of pressure. We thought we needed a good partnership. Looking at the wicket, I thought once the ball is old it would be good to bat. We just wanted to build a partnership and that’s what we did,” said Pujara.

Karnataka skipper Manish Pandey was disappointed with the result. “We have a lot of match-winners in the team. Many of us have been playing at the highest level. This season has taught us a lot,” he added.