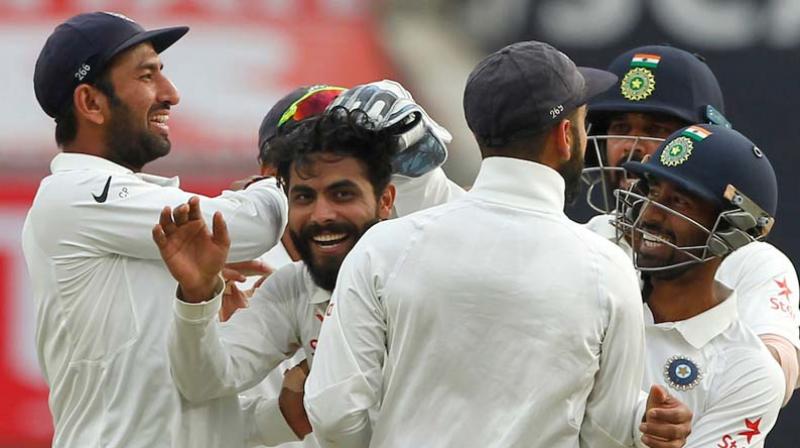 While Cheteshwar Pujara was India’s leading run-getter in the four-match Test series against Australia with 405 runs, Ravindra Jadeja topped the list of bowlers with 25 wickets. (Photo: BCCI)

New Delhi: With 405 runs at a healthy average of 57.85, Cheteshwar Pujara emerged as the best Indian batsman in the just-concluded Test series against Australia while Ravindra Jadeja was hands down winner among the bowlers with 25 scalps.

Pujara's tally was next only to top scorer in the series, Australian captain Steve Smith, who scored 499 runs at an impressive average of 71.28.

Pujara stood like a rock against the pace battery and the quality spinners of the visitors. His contribution was immense in shaping India's series win. Not only this series but the Saurashtra batsman has been consistent in India's home season during which he scored a staggering 1316 runs from 13 games with four hundreds.

Jadeja earned himself the distinction of being a reliable Test all-rounder. In this series he took 25 wickets, the highest by any bowler as he managed four more than teammate Ravichandran Ashwin and six more than Australia's spin twins – Steve O'Keefe and Nathan Lyon, who scalped 19 each.

Jadeja may have scored just 127 runs in this series but his two half-centuries came at crucial junctures had tremendous impact on the outcome of the matches. In the entire home stretch, he scored 556 runs and took 71 wickets from 13 games.

"There's self-satisfaction and now I am suitable for both formats and the confidence inherently increases that I can back myself as a longer version player. My shoulder is on auto-mode and everything is happening automatically," Jadeja has said.

For Kohli, Jadeja could be his 'go to' man when India play outside sub-continent and three pacers would be the order of the day.

Another Indian batsman to leave an impact was opener KL Rahul, who scored 393 runs. Such was his consistency that he scored six half centuries in eight innings. He was only the third batsman in the series after Smith and Pujara to score more than 300 runs.

The next best was Matt Renshaw, way behind at 232 runs as only four batsmen in this series managed more than 200 runs.  Ajinkya Rahane and Peter Handscomb were tied in 198 runs apiece.

Umesh Yadav with his 17 wickets was another man to impress in this series. From being a bowler who had no control over his line and length, he looked a completely different customer as he troubled the Aussies with his consistency and teasing bouncers in this series.