South Africa were last year sanctioned for altering the condition of the ball in a Test against Australia in Hobart. 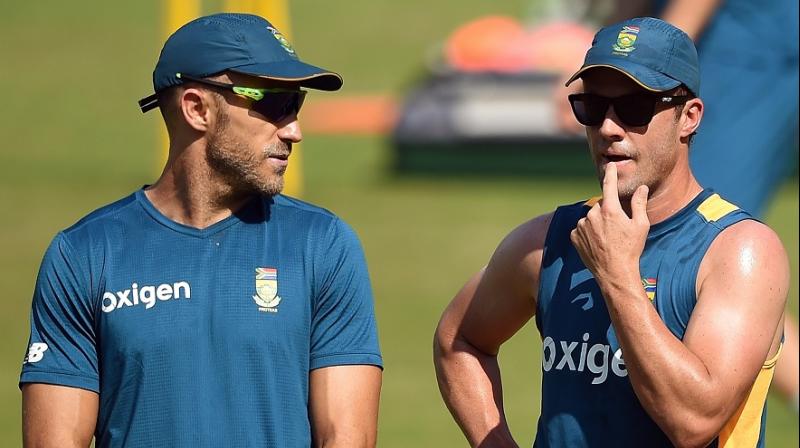 AB de Villiers said he felt it was being implied that his players were at fault for scuffing up the ball. (Photo: AFP)

Southampton: South Africa skipper AB de Villiers has said that he was "pretty upset" with the umpires implying that his side was involved in ball tempering during the second ODI of the three-match series against England which they lost by two runs at the Ageas Bowl.

De Villiers became embroiled in a row with the standing umpires, Rob Bailey and Chris Gaffaney, after they queried the condition of the ball before the start of the 34th over in 's innings bowled by Keshav Maharaj.

However, the Proteas skipper later said he felt it was being implied that his players were at fault for scuffing up the ball.

"The umpires felt the condition of the ball changed," ESPNcricinfo quoted de Villiers as saying. "In a way, making me feel that we are responsible. I was quite upset about that. I don't know what else I can say, I was pretty upset. It's done and dusted now, nothing happened, there were no fines given or anything like that.

"I honestly told the umpires we have nothing to do with the condition of ball, except for the fact that Maharaj bowled five overs on the trot from that end. The ball generally scuffs up when the spinner bowls a few overs. I expressed my views about that and we move on," he added.

When asked if he felt that the umpires implied that the visitors were had been engaging in ball-tampering, de Villiers replied: "Yes. That's the feeling that I got and I expressed that I was quite upset about it. But like I said, no further steps were taken from both parties.

"If I can give my five cents, I felt it was a bad ball and that happens sometimes. The leather comes off and you do get that. Unfortunately the umpires didn't agree. [But] nothing happened, generally there's a warning or a fine, none of that happened, which tells me they realised we were innocent in this case," he added.

It should be noted that were last year sanctioned for altering the condition of the ball in a Test against in .

Skipper Faf du Plessis was found guilty of breaching Article 2.2.9 of the ICC Code of Conduct after television footage appeared to show him chewing a white lolly in his mouth, licking his finger on the mint before repeatedly shining and rubbing the ball during the fourth day's play of the second Test against in .

He was fined 100 percent of his match fee by the ICC, but was cleared to play the third day-night Test at the Adelaide Oval.

all-rounder Ben Stokes was adjudged Man of the Match for 101, but Jakes Ball and Mark Wood got the hosts home as the Champions Trophy hosts enjoyed a morale-boosting success ahead of the tournament.

's captain Eoin Morgan, however, said his team were unaware of any suggestion that the ball had been scuffed up.

"Normally, if there's any dispute about the ball, they change it straight away," he said.

The two sides will now lock horns in the final ODI of the series to be played tomorrow at Lord's.