CSK fairytale ended where it began

Fans painted Wankhede yellow in the final as Dhoni has been the top drawer of crowds. 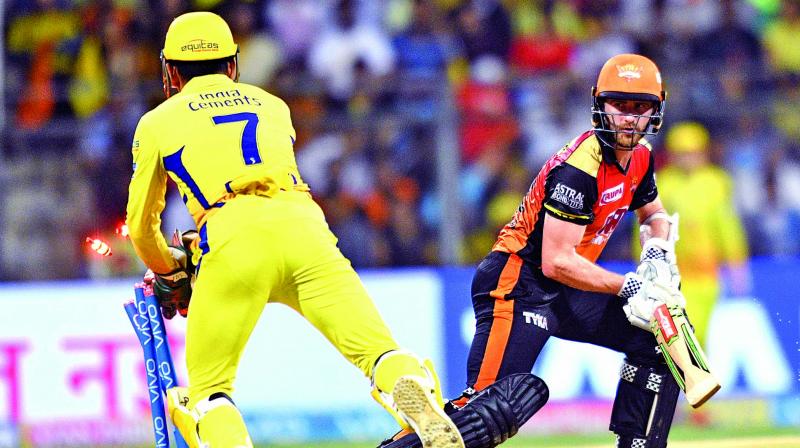 Many fans stayed put till midnight to ensure they catch the moments of Dhoni lifting the trophy. (Photo: Rajesh Jadhav)

Mahendra Singh Dhoni has been undoubtedly the most popular cricketer at Wankhede stadium after Sachin Tendulkar. Dhoni Dhoni chants are the loudest every time the former India skipper has come out to bat here. The franchise he leads — Chennai Super Kings — has enjoyed huge support here after home team Mumbai Indians.

In fact the MI fans even chanted Dhoni Dhoni and a fan exchanged blue jersey to yellow when he came to bat in the opening IPL-11 match against MI here to show respect for the man who in 2011 led India to ICC Cricket World Cup triumph at the same venue.

On Sunday in the mega final Wankhede was all yellow with CSK fans dominating their presence over Sunrisers and they were rewarded by Shane Watson fireworks to steer CSK home with eight wickets in hand. Many fans stayed put till midnight to ensure they catch the moments of Dhoni lifting the trophy.

CSK played thrice at this venue and emerged victorious in all the three matches. Unlike the past two occasions when CSK pulled off victory from the jaws of defeat, Australian Shane Watson made the challenging 179 run chase look like a walk in the park with his match-winning 117 not out. The Chennai side, who were returning to the IPL after serving a two-year ban, began their campaign with a win over defending champions Mumbai Indians at the Wankhede in a thriller where Dwayne Bravo starred with the bat to take his side home. The side then came to Mumbai for the crucial Qualifier 1 against the Sunrises Hyderabad on May 22 and they emerged victorious as South Africa skipper Faf Du Plessis shone with the ball in a low scoring thriller in company with local boy Shardul Thakur. That win secured them a berth in the summit clash which CSK cantered to an eight-wicket victory at the Wankhede here last night.

Though Dhoni didn't get to bat in the final on Sunday against SRH, the crowd rallied behind his team. CSK won all three games at Wankhede, beating SRH twice in playoffs.

Such was the atmosphere and support for Dhoni's team that former India cricket and Mumbai captain Sanjay Manjarekar took to social media to express his delight on the fan support. “It might be CSK vs SRH in the finals today, but the match happens at the home cricket, Wankhede. You just cannot keep Mumbai out of the game,” Manjarekar posted on his twitter handle.

For CSK, it all began at Wankhede stadium for the eventual IPL-11 champions. The Dhoni led franchise made a comeback to IPL fold at the same venue on April 7, after serving two years ban due to 2013 spot-fixing scandal.

“Thanks everyone for the support and Mumbai for turning yellow. Shane ‘shocking’ Watson played a shocking innings to get us through. End of a good season,” MS DHoni posted on Instagram.