Sports   Cricket  29 May 2019  'Time away helped me reflect on my game', says KL Rahul on his ton against Bangladesh
Sports, Cricket

'Time away helped me reflect on my game', says KL Rahul on his ton against Bangladesh

Rahul has more or less guaranteed his place in India's World Cup playing XI with a hundred against Bangladesh in the warm-up game. 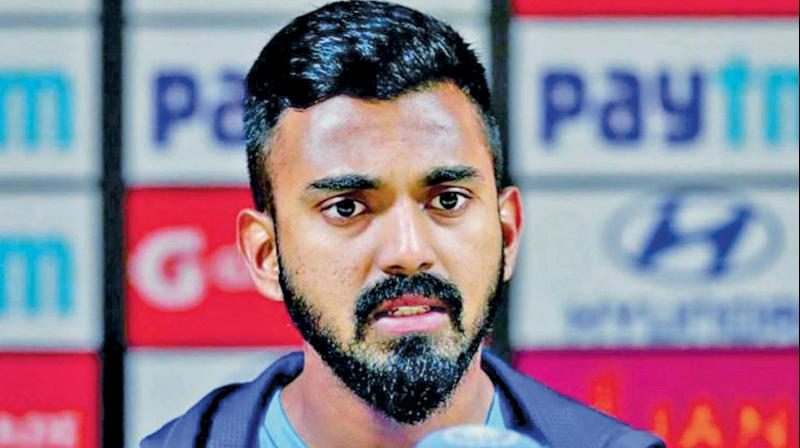 He considers himself lucky that in the past few years while playing for India, he got an opportunity to have a few good partnerships with Mahendra Singh Dhoni.

Cardiff: Indian batsman KL Rahul would never prefer a forced break but self-introspection during his time off from the game helped him bounce back well from the chat show controversy, he admitted.

Rahul has more or less guaranteed his place in India's World Cup playing XI with a hundred against Bangladesh in the warm-up game on Tuesday while batting at the much talked about No. 4 slot.

"The time off from game does give a player opportunity to reflect on himself and it wasn't any different for me," Rahul told reporters referring to the time he was provisionally suspended by the BCCI for his loose talk on a TV show.

"I spend some time with friends and family. It was important as I have been on the road for a long time. Given the situation, that's not how I would have liked to get some time off but anyway I tried to make the best use of it," said the stylish batsman, whose 108 off 99 balls has virtually ended the debate on No 4 slot.

He doesn't want to dwell on the past and the focus is now back on the game.

"What's gone is gone and the focus is always on cricket. I am really happy with how I have managed to bounce back. IPL gave me a lot of confidence and really happy that I could carry that confidence here today (Tuesday)," Rahul said.

He has said it a number of times and again acknowledged the role played by India A coach Rahul Dravid in his comeback.

"There were a few things about my batting and my technique that I needed to fix. I worked with my coach back home in Bengaluru and India A games gave me a bit of opportunity.

"Like speaking to Rahul Dravid about mental preparation and how to handle low confidence and poor form. The best way to get back to scoring runs is to find that form in the middle and I got that opportunity. From there, it just carried on. I was very hungry to come back and score runs for whatever team I played," he spoke on his comeback.

He is all set to bat at No 4, having opened the innings most of the times, he has been ready for quite some time as the current team expects all the players to be ready for any role assigned to them.

"Every batsman, who has played at this level knows how to handle pressure and responsibility given to him. It's a team game where everybody is prepared for the last couple of years so that any role can be given, come a big game. So all of us have prepared in that way and nothing that is given to any individual will come off as a surprise," he said when asked about the pressure of playing at a new slot.

He considers himself lucky that in the past few years while playing for India, he got an opportunity to have a few good partnerships with Mahendra Singh Dhoni.

"When we lost 4 wickets for not too much (against Bangladesh), it was important for us to stitch a partnership. We (him and Dhoni) didn't really talk too much in the middle as each of us had individual plans and we wanted to play that role.

"Batting with MS is a dream and luckily we have had a few good partnerships with him in the last two or three years. So I enjoy batting with him. The way he batted was so good to watch from the other end. He dominated the spinners and was striking from the first ball as well. So it was great for us," he was all praise for the veteran.

Asked about the Sophia Gardens track, the batsman said that it was a "beauty" and he would love to come back here.

"I got a hundred so I would love to come back here. There was a bit of movement, in the first 20 or 30 overs. There was a little bit for fast bowlers. The wicket played beautifully. It was good to be out there in the middle and get used to the format and spend some time."