Imran Khan is the epitome of excellence

Imran is the first international to reach such political heights, and remarkably, by starting his own party only 22 years back. 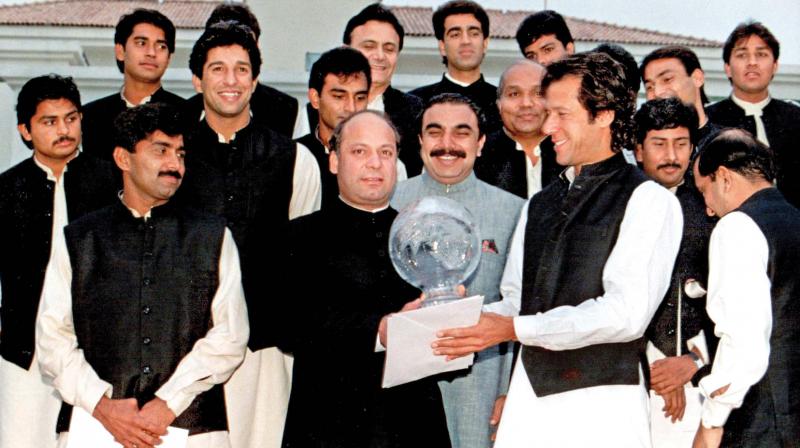 A file photo of Imran Khan offering the World Cup to the then Pakistan Prime Minister Nawaz Sharif at a dinner hosted in honour of the team after they won the 1992 World Cup. (Photo: AP)

Allegations of electoral malpractice and skepticism about his ability to govern independent of the army have been swirling ever since Imran Khan emerged as the prime minister elect of Pakistan. But the cricket world has hailed his achievement.

Wasim Akram, Waqar Younis, Shahid Afridi and Mohammed Aamir are among many renowned players from his country to have gushed over Imran’s splendid performance. But the hosannas are not restricted to Pakistani cricketers.

Fraternal joy over Imran’s success is understandable. Among sportspersons who have played at the international level, only George Weah, who represented Liberia in football, went on to lead his country in politics.

Imran is the first international to reach such political heights, and remarkably, by starting his own party only 22 years back. It’s been a long and largely lonely struggle that appears to have finally borne reward.

“I have no doubt he will be Prime Minister one day’’, I recall Wasim Akram telling me in 2013 when we were part of the same TV commentary team. “Even if he’s 90 and doddering, he won’t give up!’’

The self-belief, tenacity, resilience, deep ambition and optimism — which have brought him to this stage in politics — were defining attributes in Imran’s 20-year career in international cricket too.

While his Casanova image grabbed headlines all over the world, at his core Imran was immensely hardworking and dedicated, driven to excellence and triumph with unremitting passion.

Starting as a tearaway fast bowler in 1971, with little control over line and length, he worked relentlessly to hone his technique and skills till he became arguably the world’s best in the early 1980s. It had taken him over a decade, but he had reached his goal.

By this time, he was also arguably the world’s best all-rounder. And unarguably the best captain, reining in Pakistan’s scintillating but mercurial players, spotting and blooding talented but rank youngsters to become world beaters.

His authoritative (many said ‘autocratic’) leadership was matched by personal examples iin determination, as I remember from my first tour to Pakistan in 1982-83. This was a series India lost badly 0-3 largely because of Imran’s brilliant swing bowling.

Not many know, however, that he continued bowling of his full run-up despite suffering an ankle problem midway through. He couldn’t bowl for two years after that, but Imran’s intent to beat India by the largest margin wasn’t to be stymied by injury.

At one stage, it appeared that his dream of winning the World Cup would remain unrealised. He had played in all tournaments from 1975, and Pakistan had been semi-finalists in 1979 and 1983. In 1987, playing at home, they were favourites, but lost again in the semis to Australia.

Dejected, Imran announced his retirement, the only instance I remember where he was consumed by setback. Subsequently he was convinced to return by then President Ziz-ul-Haq, and went on to lead his team to a memorable victory in the 1991-92 World Cup.

Past 39, Imran was a lion in winter by then where cricket was concerned. But his superb leadership saw a young team pull off a remarkable turnaround, coming back from the brink of ouster midway through the tournament.

By this time, he was committed to building the best cancer hospital in Pakistan his mother’s memory, a monumental task even for a cricket superstar. Imran’s diligence and commitment saw the project through. This experience perhaps forged his entry into politics.

For those who know him through and for cricket (like this writer), Imran is the epitome of excellence as player and leader: In my opinion, he’s the most influential along with Sir Frank Worrell in the post-War era.

But politics is a different ball game, and questions have been raised.

Analysts have found it difficult to define his politics over the past two decades. At various times he’s been described a neo-liberal, centrist, pacifist, nationalist and hawk.

In recent months, compunctions about his proximity to religious ultras in Pakistan and a subservient role to the army have worried political watchers in the West, and particularly in India, what with relations between the two countries at a low ebb now.

Imran’s first response after the elections has been encouraging. He’s said he knows this country (India) more than anybody else in Pakistan and that he shouldn’t be typecast as some Bollywood villain, or words to the effect.

This reassurance hasn’t stymied speculation and suspense about the future though. As he starts his second innings, whether Imran will captain the Generals or the other way around is the question that looms.