In two wins from two matches, the Royals have got past the 200-mark with ease. 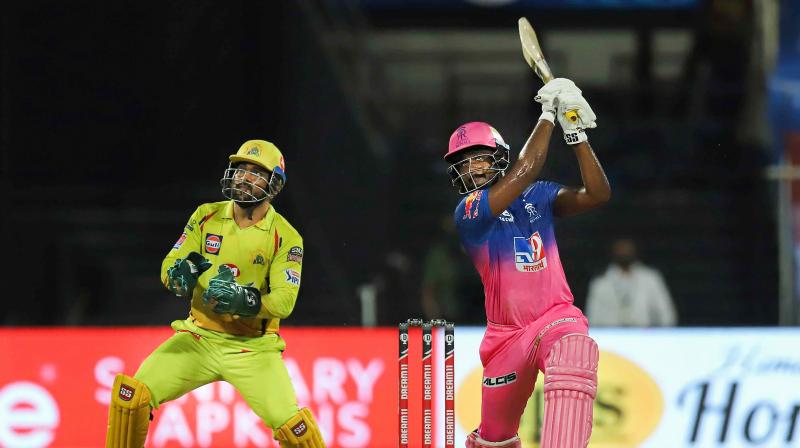 Dubai: Kolkata Knight Riders will have to bat out of their skin to stop a marauding Rajasthan Royals when the two teams clash in an IPL match at the Dubai International Stadium here on Wednesday.

Having started off as underdogs, the Royals have taken the IPL by storm, chasing down the highest tournament total 224 against Kings XI Punjab in their last match.

In two wins from two matches, the Royals have got past the 200-mark with ease. In their success, they have found two stars in Sanju Samson and Rahul Tewatia, who have outshone marquee players.

In his second coming at the Royals, little known Haryana all-rounder Tewatia has got instant stardom for his 31-ball 53 against KXIP, which helped the side chase down a record 224 with three balls to spare against KXIP.

Struggling to get off the blocks quickly, Tewatia, who was on 17 from 23 deliveries with the team needing 51 from the last three overs, suddenly woke up from slumber, smacking left-arm quick Sheldon Cottrell for five sixes in an over to turn the tables for RR.

But the season so far belongs to Samson—the wicketkeeper from Kerala.

Boasting of the season’s highest strike-rate of 214.86, Samson has two successive half-centuries that has once again put him in contention for a longer rope in the Indian team as a keeper-batsman.

Skipper Steve Smith has been ever reliable, striking two half-centuries, while opener Jos Buttler will be waiting to explode.

To match or even surpass the Royals, KKR have the biggest stars in Andre Russell to go along with reigning World Cup winning English skipper Eoin Morgan, one of the best in limited-overs cricket.

But both Morgan and Russell have got limited opportunities so far, having dropped down to No 5 and 6 respectively.

The fixture might just finally see them bat higher up, especially the star Jamaican, who was their highest run-getter last season with 510 runs at an astonishing strike rate of 204.81.

Having started off with a familiar defeat to Mumbai Indians in their opener, Kolkata Knight Riders put up a determined show to bounce back against a sloppy Sunrisers Hyderabad.

Come Wednesday, it may well be a run feast with no target ‘safe’ against the Royals.

Dubai has been host to both the Super-Over matches this season. The venue will be an unchartered territory for both the teams who will be playing here for the first time this season.

For the record, the teams batting first have won all the five matches here so far.